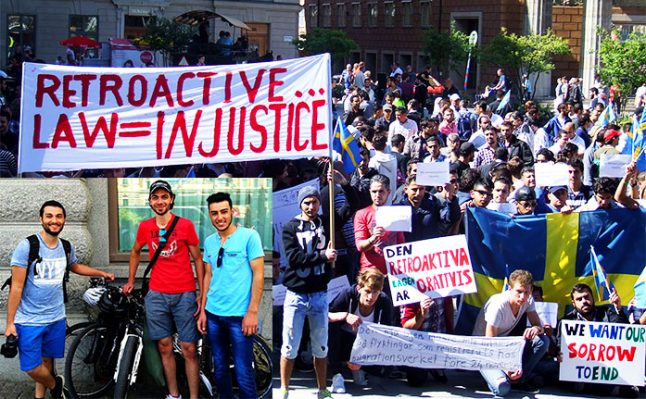 The Local Voices spoke to some of the organizers and protestors about the event and their worries for the future.

Mohamd al-Ali, an asylum seeker, is one of the protest’s organizers.


Mohamd and Rasha (whose comments appear below). Photo: The Local

“I wanted to run this peaceful protest to send a message to Swedish people and to the government that we want the new asylum laws to be amended.

The new laws mean that no matter when the asylum seekers arrived in Sweden, those whose asylum decisions will be issued after July 2nd, 2016 will be  granted temporary residence permits for 13 months. That means the new laws are going to have a retroactive effect and they are selective, because families and minors who applied for asylum before that date won’t be affected by the new laws – only single adults will be! Why there should be this kind of discrimination? I think our voices will be heard by the government, because the Swedes feel our pain and are sympathizing with us. We are here as a group of asylum seekers and volunteers to protest silently and peacefully.

We want the law to be more merciful and at least not to affect people who applied for asylum before these laws were issued.”

Mohammad Jemmo, aged 24, is from Aleppo. He left Syria in January 2014 for Turkey, and left for Sweden in August last year. Today he cycled 250km from his asylum camp in Grängesberg, Dalarna, to get to the protest in Stockholm.

“The journey took us around 19 hours; we arrived at midnight last night. It was really exhausting: we felt sad, smiled and laughed – it was a challenge.

We cycled because as refugees, we can’t afford any public transport, and in the hope that people would understand our pain. We want the Swedes to hear our voices and we thought that by doing something that is really exhausting, maybe it would make people grasp how much in pain we are. I don’t think many people here understand what our lives are like in an asylum camp!

To me, the new laws are very oppressive and they shocked me. I arrived in Sweden with a few friends; some were granted permanent asylum and I wasn’t. Because the decision of my asylum application was delayed, I am now affected by the new laws.

I had to leave Syria while I was still in my first year studying economics at Aleppo university. How can I continue my studies now with just a temporary residence permit of 13 months? How can I reunite with my wife?”


Ali Kridi also cycled for 250km and lived on biscuits and juice throughout his journey. Photo: The Local

Rasha Daoud, 41, is a volunteer from Lebanon, and helped to organize the protest.

“I have worked with the migration board before and I am still up to date regarding the new laws, specifically those affecting the newcomers. These new laws felt really oppressive and unjust to me. Although I am not personally affected, a huge number of asylum seekers are going to be disadvantaged by the new measures.

The protesters’ enthusiasm and sadness motivated me to participate in this event. We hope these new laws are going to be reconsidered at least – people are deeply affected and are really sad. The new laws don’t sound logical at all.”

Ahmad Arafeh, 27, is a volunteer from Syria.

“I am personally affected by the laws: I studied dentistry and am aged over 25. I arrived in Sweden in July 2015 and due to the new laws, I won’t be able to either continue my studies nor work. I have a profession and a degree but the new laws mean that I would be stuck in inertia throughout the 13 months of temporary residence permit, waiting to see if I was granted a positive decision after all.

I have been in Sweden for 14 months and would only get a residence permit for 13 months, that’s strange! Is that fair?”

To read more about what the changes to the asylum laws mean, click here.