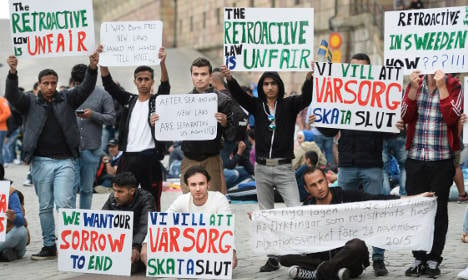 Protestors outside the Riksdag on Wednesday. Photo: Fredrik Sandberg/TT

Around 500 people demonstrated at Mynttorget square near Sweden's parliament building on Wednesday in protest against the new restrictions. The amended laws, which came into force on July 20th, have introduced a temporary residence permit as well as tightened family reunification laws.

They are designed to significantly reduce the number of people seeking asylum in Sweden, which received a record 163,000 applications in 2015.

And organizers of the protests against the changes say they expect even more people to turn up on Thursday, based on interest expressed on their Facebook group.

“I came as a refugee to Sweden at the start of the 1990s, and I know how insecure it can be,” Rasha Daoud, who is now a Swedish citizen told news agency TT.

“A temporary residence permit doesn’t give you much time to do anything. Perhaps then you won’t bother to learn the language.”

Wednesday’s demonstrators included both people without a residence permit and Swedish citizens. Many travelled from other parts of the country to take part, including some who made the 1200km journey from Kiruna in northern Sweden to Stockholm.

The Local Voices spoke to one refugee who cycled 250km from his asylum camp in Dalarna to participate.