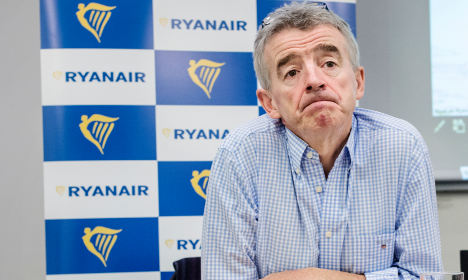 The airline blames high airport fees at the west coast hub, which is operated by Swedish Swedavia, for its decision to slash its 18 weekly flights from October, reports regional newspaper Göteborgs-Posten.

“The cuts are a result of Swedavia's decision to raise its airport charges. That makes the airport less attractive to us and we encourage them to lower their fees to promote traffic, roads and job growth,” Ryanair spokesperson Robin Kiely told the Gothenburg daily.

But Charlotte Ljunggren, airport director at Landvetter, denied the fees had been raised.

“We have not raised any charges. We are actively working to keep them down to be as competitive as possible. This year we have reduced the fees by around seven percent,” she said.

“If you look at comparable airports in Oslo and Copenhagen, we are almost 20 percent lower for those charges. So I do not understand [Ryanair's] reasoning,” she added.

Norwegian and British Airways both fly from Gothenburg to London, and the former has doubled its flights to the British capital, so travellers won't suffer the full impact of Ryanair's cuts. There are currently eight flights a day between the cities, to be reduced to six a day this autumn.

Ryanair boss Michael O'Leary has previously accused Sweden of limiting its chances in the global business community with high costs.

“You've got good football teams and generally attractive ladies, but other than that I don't wanna go here,” he told The Local and other journalists at a briefing in Stockholm in February. “We go where the growth discounts are,” he added at the time.