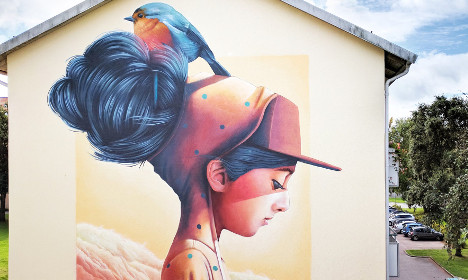 Linus Lundin – who works under the pseudonym Yash – has done most of his work in the Swedish capital, where he has lived for the last five years after moving from the small town of Gnesta.

His colourful murals are marked by their emotive faces and depictions of animals interacting with humans. Each one takes around five days to complete – not including the extensive planning and sketching that is required beforehand.

“It’s important to get the expressions right in my paintings,” he explained.

“I get my inspiration from my own feelings and the feelings of those around me. I ponder about and depict security, the search for something, and anxiety quite a lot. I also think a lot about the relationship between humans and animals.”

My finished wall from #springremake2016 in #stockholm. Thanks @snosatra @streetcorner.se @loopcolors for the event and all the other artists and visitors. I had a great weekend! #yash #snösätra

Incredibly, Lundin has no formal education in art beyond high school level. Instead, he developed his style by putting in hours and hours of hard practice.

“I just went out and painted, but there’s a lot of time and work behind everything,” he noted.

“I’ve painted murals for over ten years now, but they didn’t always look like they do now. Finding my aesthetic has been a long process. I was lucky enough to have a wall in the small town I grew up in where I could develop my work legally.”

Lundin’s most recent piece “Where Trees Don’t Grow” was painted in the Biskopsgården suburb of Gothenburg. The area made headlines recently due to a high-profile shooting at a restaurant, but the artist insisted that his experiences there have been far more positive.

“Biskopsgården has certainly been in the papers, but it’s not really fair. You only get to read about the bad stuff. It’s a nice place and people are really open and caring over there. I had a great time there,” he said.

“The inspiration behind that piece comes from helping each other through tough times, not judging your neighbour and treating them like you would treat yourself. I thought it would be a nice fit for the neighbourhood.”

“Where Trees Don't Grow”. Final shot of my finished wall in Gothenburg for @artscape_festival . I've been dreaming of painting a wall like this since I was a kid. Thanks for making it possible! 🙂 It's been a pleasure! <3 #artscape2016 #göteborg #biskopsgården

The art world is notoriously competitive, but after previously doing other jobs to pay the bills, Lundin recently decided to try working full time on his paintings. So far, business is good.

“I had my first show this year, which included canvas work, and that went very well,” he explained.

“I guess I’ll just have to see what happens in the future, but it’s working out so far at least.”

The majority of the artist’s work has been done in Sweden, with the exception of one piece produced last year in Bristol, home of none less than Banksy. And while Lundin plans on painting abroad more in the future, he is happy to be a part of the growing mural scene in his native country.

“I’d love to paint abroad more and have some plans coming up, but I also enjoy painting in Sweden a lot,” he said.

“Sweden has been a bit behind in the mural scene, so it feels nice to be part of the change that is happening here now.”