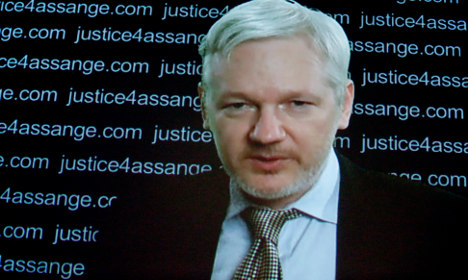 “We have appealed the decision to keep him remanded in custody in absentia,” Tomas Olsson told the AFP news agency. The paperwork was submitted to the Svea Court of Appeal on Tuesday.

Swedish prosecutors issued the arrest warrant because they want to question Assange about the rape allegation, which he denies.

The 45-year-old Australian sought refuge in the Ecuadorian embassy in London in June 2012 after exhausting all his legal options in Britain against extradition to Sweden.

Assange's lawyer urged Sweden to respect a non-binding legal opinion by the UN Working Group on Arbitrary Detention, which on February 5th ruled that his confinement in the Ecuadorian embassy amounted to arbitrary detention by Sweden and Britain.

“That is part of the basis for the appeal. The other is that the prosecution has made no effort to question Julian Assange after all this time,” Olsson said.

Both Britain and Sweden have angrily disputed the UN group's findings.

The Stockholm district court found on May 25th “contrary to the UN Working Group on Arbitrary Detention, that Julian Assange's stay at Ecuador's embassy in London should not be considered a detention”.

It said the arrest warrant against him needed to be maintained because “there is still a risk that he will abscond or evade justice”.

The alleged crime dates back to 2010 and the statute of limitation expires in 2020.

Assange fears that if he were sent to Sweden to face trial, he could be extradited to the United States to be tried over WikiLeaks' publication of hundreds of thousands of classified documents and face a long prison sentence or the death penalty.

His lawyers have said that was why Assange refuses to travel to Sweden to be questioned by prosecutors.