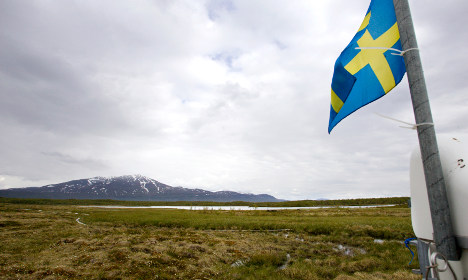 Should Sweden’s furthest north be independent? One journalist thinks so. Photo: Henrik Montgomery/TT

On Monday, Sweden's second-biggest tabloid, Expressen, published Gröning’s article “Norrland should do what Scotland did and demand independence”.

In the two days since it has been shared thousands of times on Facebook, sparked discussion on Twitter, and even provoked a response from a politician.

A poll on public service broadcaster SVT's website meanwhile had 89 percent of 3739 respondents in favour of demanding self-determination for the region at the time of writing – though with that poll open to anyone regardless of where they live, the figure should be taken with a grain of salt.

So does the journalist really believe that an official vote should happen?

“I really do believe Norrland should have a referendum on independence,” Gröning told The Local.

“Like the Scottish people, they have contributed so much to Swedish society for so many years, but don’t get anything back.”

“We have what you could call the Norrland paradox: The state puts a lot of money into the big companies, but they take that money those companies earn then send it to Stockholm. Nothing gets left in the north,” she claimed.

READ ALSO: 'Northerners don't get the same service or respect'

The economic edge to her argument may sound familiar to anyone who has followed independence movements in places like Scotland or Catalonia, where advocates claim that the regions receive an unfair share of money compared to the amount sent to central coffers.

“Norrland has the forest industry, water power, mining, and contributes a great deal. But nothing comes back. The poorest area of Sweden is the north. I’ve lived here for maybe 20-30 years, and people have been saying ‘this has to change – can we have some of the money from the big mining companies?’,” she said.

“When I wrote the article, the idea was for it to be the last piece in a puzzle, to make people say enough is enough. We have to do something. We have to act like the Scottish people.”

The journalist insisted that independence would be a positive change for Sweden’s northernmost region, and could even be a reminder to the country’s capital of Norrland’s very existence.

“Independence would be very good for Norrland. We have 11 power plants in the community, and one of them alone accounts for one and a half percent of Sweden’s total energy supply. We’d only need to push three different buttons to turn the lights off in Stockholm,” she joked.

“People down there don’t understand that. Could you imagine if the power was out for two hours? They don’t see Sweden as united country – they only think about taking more and more.”

Gröning was keen to stress one big difference between Norrland and Scotland however.

“Scotland has something we don’t have, which is Scottish politicians who are with them and representing them. Here, the politicians do what the party say in Stockholm, that’s the problem. Only the people could rise up and say they need something.”

At least one politician hasn’t taken kindly to her suggestion of a referendum. On Tuesday, Fredrik Lundh Sammeli, who is the chairman of the Social Democrats in the Norrbotten province of Norrland, said it was “the wrong way to go”, “nothing new”, and “what northerners say when drunk at parties”.

Gröning said that kind of comment was only likely to make northerners angry, and pointed out that her feeling of frustration is one shared in other rural parts of Sweden.

“The government only concentrates on solving the problems in the big cities, taking money from the forest industry for example and investing it there, instead of seeing the country as a whole.”

“It has gone so far in Sweden now that people outside the big cities don’t trust the central politicians.”

But would a referendum on Norrland’s independence really change that divide?

Gröning admitted that she doesn’t think it would be a quick fix, but it would at least elevate the conversation.

“If we raise our voices and have a referendum, we would at least have a discussion about the country,” she explained.

“That’s my most important argument: to start a conversation.”