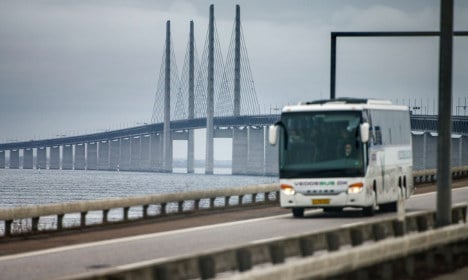 A bus on the Öresund Bridge. Photo: Emil Langvad/TT

Skåne enjoyed a 7.3 percent increase in tourism last year, the county’s tourism office has reported. And from January to June of this year, nearly 2.3 million people have stayed overnight in Sweden's most southerly county.

The number of international overnight visitors to Skåne rose 10.6 percent in the first six months of 2016 compared to the first half of 2015. Growth was biggest among Britons, up by 9,518 nights spent in southern Swedish hotels, on last year, a 29 percent increase. Every month of 2016 so far has seen all-time highs in numbers of British tourists.

Sara Brynskog, a spokesperson for Tourism in Skåne, told The Local: “The increase is probably due to a number of reasons… from our perspective, we know that there is an overall interest in Swedish culture and lifestyle. The Nordic food scene, nature in Skåne and also Nordic Noir, with The Bridge series and Wallander, have drawn a lot of attention.”

Sweden as a whole has also been gaining British attention, with 16 of the country’s 22 counties reporting growth in British tourism and an overall national increase of 16.2 percent in the first six months of the year.

While Skåne's biggest town, Malmö, benefits the most in the county from its tourism, the surge has not been limited to the city: the university town of Lund; Ystad, best-known as the home of fictional detective Kurt Wallander; and coastal town Landskrona have all seen more and more Brits paying a visit.

In the medieval coastal town of Ystad, which has doubled its tourist figures on last year, visitors can go on an ‘In the footsteps of Wallander’ tour, while Malmö’s museum has had an exhibition on The Bridge which has been running since February and is continuing until September 2017, displaying scenography and props used in its first three series.

While some have argued that the imposition of border controls between Denmark and Sweden over the Öresund Bridge could damage cross-border travel in the region, Brynskog added: “It’s too early to tell what the effects have been, but since we see an overall increase in bed nights, there are no indications so far of a loss of interest from tourists to Copenhagen visiting Skåne during their stay.”

Britain, Poland, Norway and China are currently priority markets for Skåne, with a 41.3 percent rise in tourists visiting from China being among the new figures celebrated. Tourists from Spain accounted for the highest percentage increase, up 83 percent, while the number of US visitors to the very south of Sweden has gone up by 34 percent.

“The accessibility gained through Copenhagen airport is a great benefit for Skåne, and of course also the awareness and strong brand of Copenhagen. We are working together with [tourist group] Wonderful Copenhagen on developing the Chinese tourism market to our area,” said Brynskog.

Alongside the popularity of Wallander and Saga Norén, representing the Swedish side of the hit Danish-Swedish police investigation series The Bridge, Skåne has also been making headlines in the past year for its gastro-tourism boom. Three Malmö restaurants were awarded Michelin stars in February 2016, with a fourth in the town of Tranås.