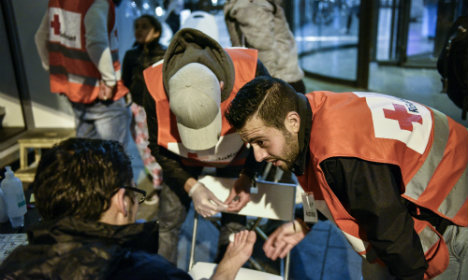 Volunteers help refugees at Malmö Central Station in September 2015. File photo: Anders Wiklund/TT
Current minimum requirements could be replaced by regulations that will be directly applicable to the law in all EU countries, according to a proposal regarding asylum rules made by the EU commission last summer.
Asylum policy currently varies significantly between EU member states, with some more generous than others. If the EU proposal is approved, the same rules will apply throughout the EU.
“Yes – if this becomes reality then it will become impossible for Sweden or any other EU country to pursue a more generous asylum policy than the one determined by the EU,” Beijer said to Ekot.
A temporary law lasting for three years was introduced in Sweden this summer. The law includes the provision that new asylum seekers can only be granted temporary residence in Sweden, and not permanent as was previously the case.
Should the new EU law be passed, it will be difficult for Sweden to revert to its own previous rules, said Beijer.
“Countries were able to have their own, more generous rules before, which of course Sweden has had, but if this law becomes reality then it [the temporary Swedish law, ed.] will become the permanent situation,” Beijer continued.