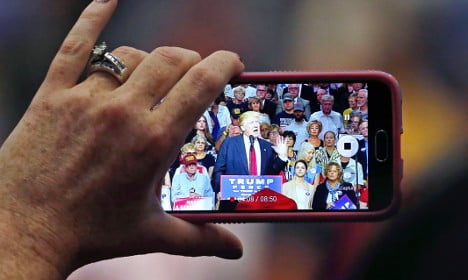 “A Trump Administration will end the corruption,” the controversial Republican nominee hit out in a speech on Monday, after accusing the Swedish firm of using “pay-for-play” cash to escape sanctions in Iran.

“In 2009, Ericsson telecommunications came under US pressure for selling telecom equipment to several oppressive governments – including Sudan, Syria and Iran. Some of these regimes used those technologies to monitor and control their own people,” Trump told crowds on the campaign trail in Ohio.

“In June 2011, Hillary Clinton's State Department began adding goods and services to a list that might be covered under expanded sanctions on Iran and other state sponsors of terrorism. During that time, Ericsson sponsored a speech by Bill Clinton, paying him $750,000 – his highest paying speech.”

“In April 2012, the Obama Administration issued an executive order imposing sanctions on telecom sales to Iran and Syria – but those sanctions did not cover Ericsson's work in Iran,” he said.

Ericsson's dealings with the Clintons have been called into question before. It has confirmed it did pay Bill Clinton to give a speech in Hong Kong in November 2011, but the company has strongly denied that any money changing hands was linked to favours in exchange.

“The investment was significant but should be seen in light of [his] perceived crowd pull, the location and an engagement that spanned two days,” Ericsson spokesperson Karin Hallstan told conservative newspaper Washington Times last year.

“The conversation regarding Iran that you refer to had no impact on this decision and was not considered by the event team.”

Trump's presidential campaign has not won him much popularity in Sweden.

Former prime minister Fredrik Reinfeldt suggested in an interview earlier this month that he could be “dangerous” for the world. His successor and current prime minister Stefan Löfven has also thrown his support behind the Democrats' Clinton. And Swedish Hollywood actor Joel Kinnaman has said that if Trump wins he will move back to Sweden.

PARTNER CONTENT
US Voters: These midterms matter – here’s how to request your ballot