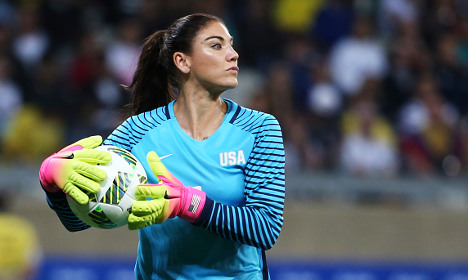 Hope Solo made her comments after Sweden knocked the US team out of the Olympics. Photo: Eugenio Savio/AP

The 35-year-old Solo made the comments after the Americans were eliminated in a penalty shootout from the Rio Olympics women's football tournament on August 12th.

“The comments by Hope Solo after the match against Sweden during the 2016 Olympics were unacceptable and do not meet the standard of conduct we require from our National Team players,” US Soccer president Sunil Gulati said in a statement on Wednesday.

“Beyond the athletic arena, and beyond the results, the Olympics celebrate and represent the ideals of fair play and respect. We expect all of our representatives to honor those principles, with no exceptions.”

Solo wasn't backing down Wednesday and defended her “coward” comments by saying the suspension wasn't warranted.

“I am saddened by the federation's decision to terminate my contract,” Solo told Sports Illustrated. “I could not be the player I am without being the person I am, even when I haven't made the best choices or said the right things.”

Solo said she plays and speaks with passion and is trying to be an example for future US female players.

“I did the job of a pro athlete the only way I knew how – with passion, tenacity, an unrelenting commitment to be the best goaltender in the world …. to elevate the sport for the next generation of female athletes,” Sports Illustrated quoted her as saying.

This is not the first time Solo has been suspended. She was banned for 30 days in 2015 after an incident at one of the national team's training camps.

“Taking into consideration the past incidents involving Hope, as well as the private conversations we've had requiring her to conduct herself in a manner befitting a U.S. National Team member, U.S. Soccer determined this is the appropriate disciplinary action.”

“We played a bunch of cowards,” Solo said. “The better team did not win today. I strongly believe that.”

“I don't think they're going to make it far in the tournament.”

Solo made the comments because she felt the Swedes were playing too defensively.

The defeat was the Americans' first in 15 games at the Olympics and only their third ever in Games history having won four golds and a silver since women's football was introduced to the Olympic programme.

US Soccer said in the news release that Solo won't be eligible to try out for the national team again until next February.