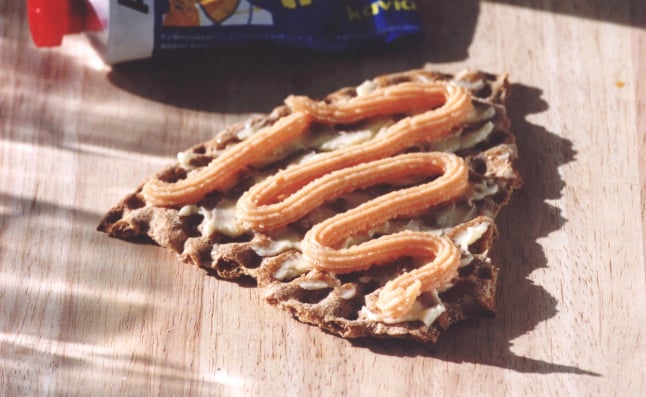 Saina Behnejad was born in Sweden but moved to Britain with her Iranian parents when she was five. But with relatives still based in the Nordic country, there is certain Swedish food she just can't shake.

READ ALSO: 'I'm one of those who don't know where they belong'

The first and most essential weird Swedish food is the one and only kebab pizza. It has made headlines around the world, because frankly, who would have thought that doner kebab meat slices would go in anything else but pita bread? Incredibly, the kebab-pizza combo doesn't appear to be off-putting. In fact, kebab is one of, if not the most popular pizza topping in Sweden.

The kebab pizza is a creative, and in my opinion, delicious, Swedish invention that combines Italian and Turkish cuisines. I don't know what the Turks or Italians think about the now infamous kebab pizza, but I have a feeling they'd be perplexed by it. Ever heard of the Flying Jacob? It's a Swedish casserole that consists of chicken, cream, chili sauce, roasted peanuts, bacon and bananas. Yes, you read that correctly. The dish was invented by Ove Jacobsson, who worked in the air freight industry in the 1970s, which explains the odd name. The bananas do throw some off when they first see it, but the mix of flavoUrs is usually received well.

If you're new here you may have noticed another surprising dish that involves that particular fruit: banana pizza.

Yes, once again, you read that correctly. Judging by the example of the kebab pizza listed above, it seems Swedes like to just throw everything they can get their hands on onto pizza dough. Ok, maybe that's a bit of an exaggeration but given this pizza consists of bananas, curry powder and cheese it's not too far off. Some put ham or shrimp on there, and vegetables – usually green bell peppers. Yes, it's weird, but tasty.

As for the Flying Jacob, if you're interested in cooking one up here is a perfect video guide:

Pancakes are always good for breakfast, brunch and dessert, but how about as a main dish for lunch or dinner? Children everywhere rejoice: Sweden has it covered. Basically, it's pancake batter poured into a big pan and baked in the oven, then eaten with butter and jam.

Carbs, fat and sugar for dinner seems a little strange, but sometimes they throw in some bacon, so think of that as your protein. And the buttery, brown and thick pancake will probably sway you once you see it coming out of the oven. Who can turn down pancakes anyway? Put that stuff away and don't ever bring it here again.

Messmör is a product made from whey, the part of the milk that's left over after you take all the good stuff out of it when making cheese. Sounds weird? Wait…

It's not very fatty, but it is quite sweet, and it contains a lot of milk sugars, calcium and iron. It's meant to be a healthy substitute for milk and if you grew up eating it as a child you probably love it. But I'd rather have the real thing, please. Real cheese vs Messmör, what would you go for? Photo: JonasB/Wikimedia Commons

This stuff tastes beautiful. I'm not holding back here because even thinking of it makes me hungry. To someone who doesn't come to Sweden at all or hasn't grown up here it sounds understandably revolting. But bear with me.

The most Swedish brand you could ever think of is Kalles, which has been around since 1954. I grew up with them being in constant supply in my fridge. You can fully appreciate the creamy, smoky flavored spread once you get over the fact that you're squeezing caviar out of a tube, and it can be topped with a hard-boiled egg or cheese. The most Swedish of Swedish brands is Kalles Hasse Holmberg/TT

The texture, the texture people. Your teeth just glide through it when you take a bite, although the taste itself isn't bad. I understand there are a variety of sausages in Sweden, and the dear Swedes love their sausages. No disrespect, but so far I haven't had one I can chew without grimacing a little.

I'm mostly talking about the standard sausage you find in the supermarket or at a hot dog stand (although Swedish mustard is amazing), so I can't write them all off. I'll continue my quest for the perfect Swedish sausage. Article written by The Local contributor Saina Behnejad in August 2016.