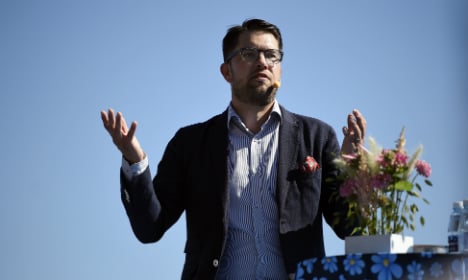 The party says the minimum pension ought to be raised by 10 percent. Photo: Emil Langvad/TT

Sweden Democrat leader Jimmie Åkesson said the minimum pension guaranteed for the country’s retired population ought to be increased by around 10 percent, or 800 kronor (€85), per month.

“We won’t support any government which doesn’t improve the situation for the poor elderly. That’s a promise,” the politician said during his annual summer speech in Sölvesborg in southern Sweden on Saturday.

Åkesson said higher pensions would be vital in getting the party’s support in the next elections, describing the Sweden Democrats as the country’s “the social conscience”.

“Sweden can do better,” he said, calling Prime Minister Stefan Löfven a “traitor”.

Political analyst Andreas Johansson Heinö said the move is only aimed at attracting new voters as the party’s anti-immigrant stance is no longer as unique, with more and more political parties calling for stricter policies on migrants.

“So it’s handy to then represent yourself as speaking up for voters who you consider not having been treated well and that other parties haven’t really cared about. And I think a lot of people see this [particular] voting group as rather large and that they are subject to a fair bit of injustice,” he was quoted as telling Swedish news agency TT.

Löfven quickly dismissed Åkesson’s vows, saying there was ”no credibility at all” in the statement.

“They make out to have money that no one else has,” he said, adding that the far-right party recently voted against a proposal to lower taxes on pensions.