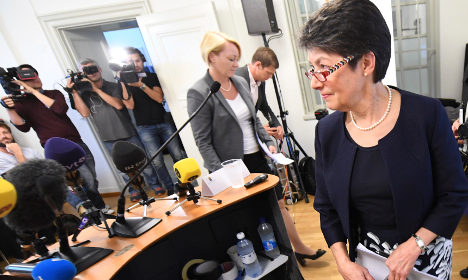 Few new details emerged at a press conference held by Ny and her colleague Ingrid Isberg in Stockholm on Wednesday to update Swedish and international media on the ongoing investigation.

Ny said she had been told that the Svea Court of Appeals would announce on Friday whether to uphold or throw out Stockholm District Court's decision to keep Assange remanded in custody 'in absentia' over a 2010 rape allegation, an accusation which the 45-year-old Australian denies.

A major point of contention is that Assange has yet to be questioned in the case. After exhausting legal options in Britain, he fled to Ecuador's London embassy in 2012. Ny said she had been trying to interrogate him since 2010 and defended a decision not to seek permission to meet him in London at an earlier stage.

“Normally, the suspect is available in Sweden. The suspect is often detained or remanded in custody because of the flight risk. I saw no reason to give Assange special treatment,” she said on Wednesday.

However, she added: “It is very unfortunate that we have not managed to move the investigation forward. In that respect it has been a failure.”

Ny explained she had eventually changed her stance on the matter because she had no other choice and said she was now awaiting a decision from Ecuador on the details of the interrogation in London.

Ecuador agreed in August to allow Assange to be questioned at its embassy, but has also suggested that the interview would have to be carried out by Ecuadoran prosecutors rather than the Swedish team.

“If we are allowed to be present, Ingrid Isgren and our investigator will go to London. We can travel on short notice,” said Ny. “What we have done now is use the only road available to us.”

The press conference was called after it emerged that Assange had spoken to a new documentary due to be aired on Wednesday evening, in which he says that he remains skeptical the interview will go ahead.

“Will she do it this time? I don’t know. But based on the experience of the last six years I’m extremely skeptical,” he said to Swedish public broadcaster SVT’s Uppdrag Granskning.

He also denied the rape allegation against him and told the programme he would not answer questions about his role in the case.

“You ask me to go into details on the matter. The right place to do that is in a formal statement to the Swedish prosecutor. She has avoided that for six years. I don’t think the right place is Swedish television,” he said.

According to newspaper Dagens Nyheter, the SVT documentary also features several pieces of evidence which suggest a US criminal investigation against Assange could be under way.

The first comes from Iceland’s former interior minister, Ögmundur Jonasson, who claims that FBI investigators visited him in 2012 regarding the WikiLeaks founder. The second is John Bellinger, a former advisor to George W. Bush, who says that an investigation against Assange is ongoing in the United States.