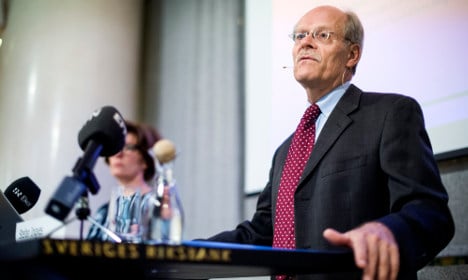 “Inflation is rising and the Swedish economy is developing strongly. However, there is still considerable uncertainty abroad,” said the Riksbank in a statement on Wednesday morning.

The bank reiterated plans announced in July that it would not begin raising the country's key interest rate, the repo, until the second half of 2017, as a result of Britain's vote to leave the EU.

“Economic policy uncertainty continues to be high, among other reasons due to the result of the British referendum. Economic signals following the referendum result have not been clear-cut and it is still too early to draw any clear conclusions regarding the effects,” said the Riksbank.

Sweden first slashed the repo below zero in February 2015 in a landmark decision. It hopes that the financial strategy will boost inflation to raise the price of everyday goods and services, which has been stagnant for the past years, and improve the Nordic nation's economic prospects.

The Riksbank expects to get inflation levels up to above two percent, which is the target, in 2018.

But it added: “There are several factors that create uncertainty in the inflation forecast. These include international developments, among others the effects of the result of the British referendum and weaknesses in the European banking system. Another factor is the development of the krona.”

The bank also said on Wednesday that its purchases of government bonds would continue during the second half of 2016, as it first announced in April, and added that it remained prepared to make monetary policy even more expansionary if necessary, even between ordinary policy meetings.

“But the low interest rate levels also entail risks, such as increased household indebtedness. To achieve long-term sustainable development in the Swedish economy, these risks need to be managed via targeted measures within macroprudential policy, housing policy and fiscal policy.”

The bank has decided to raise its key interest rate, the repo rate, by one percentage point to 1.75 percent, wrong-footing analysts who had expected the bank to hike rates by just 75 points to 1.5 percent

At a press conference announcing the decision, Stefan Ingves, the bank’s governor, apologised for not acting sooner to head off inflation.

“There is nothing to do but apologise that it took a little time before we understood what was happening to the Swedish economy,” he said. “We’ve been wrong on our predictions on a number of occasions, but when inflation is as high as it is right now, it’s obvious what we are forced to do.”

Sweden’s inflation rate hit 9 percent in August, the highest level since 1991, indicating that the rate hikes imposed earlier in the year have not yet started to pulls price rises down.

In a press release announcing its decision, the bank warned that high inflation “hollows out households’ buying power and makes it harder for both companies and households to plan their finances”.

Ingves said at the press conference that the pain consumers will face if inflationary expectations are allowed to take hold exceeds the pain that will be caused by a greater-than-expected rate hike.

“This is about weighting up today against tomorrow,” he said.

As well as increasing the rate itself, the bank announced that it would increase it in the future more than it had previously forecast, with the rate now projected to hit 2.5 percent in 2023, compared to 1.9 percent in its earlier prognosis, and 2.5 in 2024, compared to 2.0 percent earlier.

“The prognosis indicates that the rate is going to raised again in the coming six months,” the bank wrote. “There is great uncertainty over the outlook for inflation, and the Riksbank is going to adjust monetary policy in whatever way is needed to ensure that inflation returns to the target.”

Robert Bergqvist, senior economist at Sweden’s SEB Bank, wrote after the announcement that the hike was “not a happy step but a completely necessary one”.

He said it showed a united central bank “throwing all its weight behind an aggressive exit policy”, which he predicted would start to bring inflation under control in 2023, allowing rate cuts as soon as 2024.

But the decision was criticised by Torbjörn Hållö, chief economist at the Swedish Trade Union Confederation, who on Twitter called the decision “bizarre”, and “beyond all sense and balance”.

He argued that today’s high inflation rate was driven by power and fuel shortages, meaning increasing interest rates would have no impact.