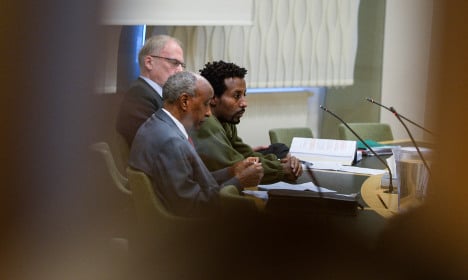 Abraham Ukbagabir sitting in the middle between his lawyer and interpreter. Photo: Pontus Lundahl/TT
Abraham Ukbagabir, an asylum seeker from Eritrea, was discovered by guards doubled up in pain in the cell where the assault took place on August 29.
Once the door was opened he collapsed into the corridor outside and lay on the floor, “in the fetal position using his hands to protect his face,” according to prison documents seen by the Expressen newspaper.
Ukbagabir in August last year stabbed a 55-year-old woman and her 27-year-old son to death at the branch of Ikea in Västerås, west of Stockholm, later telling a court that the attacks had been intended to revenge Sweden, after the country’s migration agency turned down his asylum application.
Ukbagabir used a knife pulled from a kitchen utensils display to carry out the attack, selecting his two victims at random. He stabbed himself in the stomach, but recovered after treatment in hospital.
Swedish prison authorities have considered Ukbagabir at risk of assault by other prisoners from the moment he began serving his life sentence more than a year ago.
From 8 April to 9 June, he was kept in isolation at Kumla Prison, where he has served most of his sentence, following a series of threats.
He was then moved to Sala Prison in a bid to increase his safety, but has been returned to Kumla following the attack.
According to Expressen, there is as yet no new plan as to how to protect him from further assaults.