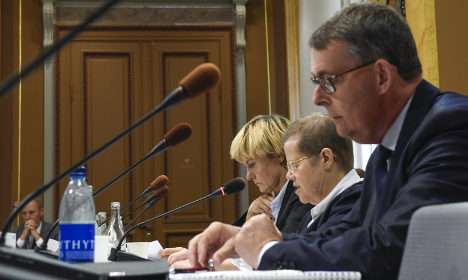 The resignation means that all three of Sweden’s Auditors General have now left their positions in just over two months since a daily newspaper’s investigation revealed details of alleged conflicts of interests and cronyism at the agency.

The auditor’s job is to make sure Sweden’s parliament is given a coordinated and independent audit of state finances, as well as taking on international assignments in other countries.

A series of scathing articles published by Dagens Nyheter (DN) in the summer reported that auditors Åberg and Ulf Bengtsson had bypassed rules the office must follow as a reviewer of public authorities, while third auditor Susanne Ackum was accused of favouring former colleagues in the agency’s recruitment process.

Ackum resigned just before DN had published information on her alleged malpractice, with the newspaper claiming she tailored job advertisements to former colleagues in the Swedish cabinet office so that no other candidates would meet the criteria.

Bengtsson later followed suit, stepping down on September 1st. In a statement he said that “the questioning of my independence in combination with my health makes me conclude that I do not have the power, strength and the commitment necessary to carry out my duties as auditor”.

At the time Åberg reacted to Bengtsson’s resignation with defiance, telling news agency TT: “I’m staying. There is a clear democratic process regulating whether an Auditor General keeps their position or not, and I believe that process should be followed.”

But on Thursday, the third and final remaining auditor completed a trio of resignations, explaining in a statement that she had decided it was best for the watchdog to have an entirely new management with the “full strength for tackling the important work of auditing assignments and driving development work and confidence-building forward”.

Åberg’s resignation will become effective once she has been replaced, as the state auditor’s work requires at least one Auditor General to be in place.