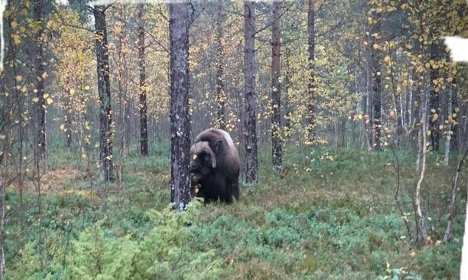 The muskox gets its name from the strong smell the male members of the species omit during the summer mating season in an effort to attract females.

But it seems one Swedish bull’s aroma as well as his radar aren't quite up to scratch. The animal, which has been sighted in recent days in the vicinity of Lillhärdal, Jämtland in western Sweden, has apparently wandered down the wrong road in his attempts to find a mate.

“He is looking for ladies and there are none of those in Lillhärdal, so he’s expected to move on,” Claes Ahlström, a communications officer at Jämtland County, told radio station P4. As reports of sightings begin to spread the ox has become something of a local celebrity. Jämtland County has warned residents not to seek the bull out in case it becomes irritated, but so far, accounts suggest the hairy lover is in a fairly solemn mood.

“My brother spotted it. It came up to him to say hello and just stood there nicely,” Pia Jäderberg, who managed to take a picture of the animal, told The Local.

“It was calm, it just wandered off,” she said, adding that this was the first time she had seen one of the creatures.

That’s no surprise. The wild muskox population in Sweden was last estimated to stand at only nine, down significantly from around 30 in the 1980s. The animals crossed over into the country from Norway after being introduced there in the 1940s.