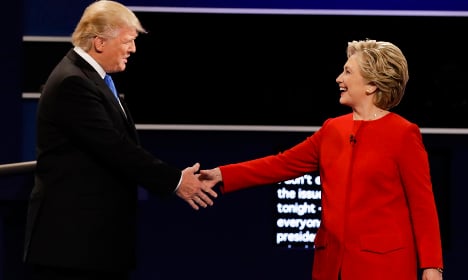 The Local spoke to Americans in Sweden after the first US presidential debate. Photo: David Goldman/AP/TT

The US community in Sweden is no exception, and The Local thought that now is the perfect time to find out how they are planning on voting and why. Here’s a disclaimer: while we did manage to speak to people in Sweden from across the US political spectrum, supporting the Democrats as well as Republicans, we didn’t manage to find a single open Donald Trump supporter.

Is that a surprise? A recent poll by Republicans Overseas showed that overseas based Republicans are more moderate than those based in the US, so perhaps not. On the other hand, the people who admitted they would vote for Hillary Clinton were not necessarily enamored by her either. Here’s what four Sweden-based US voters we spoke to had to say. And if you're a Trump voter, please get in touch. I’m an independent, but I’ll certainly vote for Hillary Clinton. There’s much to be said about them being the most unpopular candidates ever, but for me, I don’t think she’s wildly unappealing.

I would have preferred someone else, but she has the experience, and I think a lot of the critique, especially on her credibility and trustworthiness is really unfair. I don’t have any qualms with her ethics as a politician. She’s a leader and made a decision really early on to be a leader, so I trust the country in her hands.

A lot people say she is wealthy and the tax system favours her, but the fact that Trump won’t release his tax returns, I think, is an insult to what many of his supporters are for. If you get to the bottom of what they’re angry about, it’s that the executive isn’t held to the same standards as they are. He’s the only candidate who hasn’t released them, and I think he should be held to the same standards as everyone else.

I don’t think you really understand the role the US plays in global politics until you live abroad. That has changed my perspective. Every time I go home I see the inequalities we have and it’s outrageous. The fact that infrastructure and education are in the state they are. Whoever takes on this position and whoever we elect to Congress has a really tough road ahead. I’d rather not say who I’m voting for, but I will say that I’m not a supporter of either candidate. The sad reality is that neither represents the finest ideology or political representation that the US population has at its fingertips, so honestly I’ll choose the lesser of two evils.

I spend a lot of time reading, and I live in an isolated village with 98 people in it, we’re at the end of the road by any standard. From what I’ve gathered, and also from going back to the US on trips, this is a crucial election. The truth is that I’m not sure either is the best the US could have offered.

I think transparency from both sides is crucial. This person will be in charge of one of the most powerful countries and armies on the planet, so both candidates should be held to absolute transparency. I do think it would be beneficial for everyone to see into the back rooms and behind the curtains.

The truth is that from what I can tell this is the single most polarized election in the US. It’s scary because you saw the same polarization in the UK with Brexit. It doesn’t matter who the president is, when the country is polarized, that’s a real issue. I consider myself a Republican and would normally vote for the Republican candidate, but in this case I don’t think there is one who is good enough and represents my views in any way. I’m not a fan of Trump and never liked him during the primaries either. I’ve decided voting for Hillary is the better alternative.

There are people who will support Hillary because Trump doesn’t represent them and they think he’s a bad candidate. A lot of moderate Republicans will vote for her, not because they like her very much, but to avoid voting for an even worse candidate in their view.

That said, some people make it out as if a Trump presidency would be apocalyptic, but there are checks and balances that mean it won’t be the end of the world. People in Sweden seem to be afraid he’s going to do something crazy, but I’m not as scared. I do think it would result in a poorer four years.

I share the view that Hillary Clinton isn’t trustworthy. The issues about her emails show that she doesn’t have the thought process you would want in a candidate and she hasn’t proven that she is presidential in a way I would hope for. That said, I’m still voting for her because Trump would be even worse, he’s less trustworthy, less accountable, and frankly you don’t know where you stand with him. I’m going to vote for Hillary Clinton because I feel like I have to. I was a big Bernie Sanders supporter, and when he didn’t win I considered voting third party, but the combination of Trump winning the nomination and me not liking the other independent candidates means I’m forced to pick Hillary.

I think the debate was a shitshow, but I’m proud that Hillary stood up to Trump despite his constant mansplaining and interrupting, and called him out on all the shady stuff he does business wise and lies he tells.

Trump not releasing his tax returns proves he is a charlatan propped up by the anger and fear mongering of the alt-right, not a serious candidate. But I don’t think Hillary is trustworthy in so far as all politicians are degrees of a liar. I hate the fact that she panders and takes money from lobbyists on Wall Street and the petrol industry. She has been around a long time and definitely plays the game of politics, so if she wins it will be more of the status quo.

Living abroad in Sweden does affect how you vote. You get news from sources outside of the US which gives you a better perspective, and you can also see how it is to live in a country where the governmental system works for the people. In the US you assume the government doesn’t care about you, because they don’t, and that you will have to fight to benefit from your tax money. It seems to fall down a black hole that benefits the few.

Are you an American living in Sweden who want to make your voice heard? Get in touch via email at [email protected] to be considered for any upcoming features on the US election.