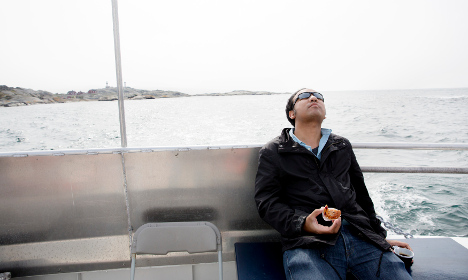 Does it get more Swedish than this? Photo: Emelie Asplund/imagebank.sweden.se

Everyone's so disorganized back home

You may laugh at “in Sveeeden veee have a system” when you first arrive, but give it a few months and before you know it you'll be spouting the same phrase to family back home.

“After living in Sweden for four years, one gets used to the systematic and organized lifestyle in Sweden. Unfortunately, it's not the case in India yet. We should really appreciate the organized and structured system in Sweden as compared to the rest of the world, which does enhance the quality of life,” Stockholm-based entrepreneur Prashant Jain, who was born in India, told The Local when we asked about his biggest 'reverse culture shock'.

… and the buses aren't great either

A reader who regularly moves between South Africa and Sweden told us she had to “practise using buses and trains” the first time she came to Sweden. “Now back in South Africa, I hate having to drive my car everywhere, especially early in the mornings in peak-hour traffic.”

Another reader said she feels down every time she returns to the US after having been to Sweden, and listed the lack of pavements and a decent bus network as one of the things she misses: “I miss the secure, almost nostalgic feeling I have when I'm out walking around. Here in California, I can't walk anywhere and there's no public transportation.” This is how much Swedish footballer John Guidetti likes buses. Photo: Jessica Gow/TT

Let's not even talk about how dirty it is

While city Swedes may moan about cigarette stubs on the street or rats roaming the streets of for example Stockholm and Malmö, they are actually pretty clean compared to other cities.

“After three years in Sweden, going back to the dirt, grime and threat of violence in Manchester, UK, was vile,” one British reader commented on Twitter.

I miss the summer

No, that's not a typo. Anyone who has gone for a midnight swim while it's still light outside knows that there's nothing quite like those temperate oh-oh Swedish summer nights, as John Travolta would have put it.

We didn't interview him for this feature, but Spanish reader Mercè Montoliu Nerín said she gets surprised when she goes home: “Weather is always a shock. In winter it can be a good shock because of more light hours, but in summer it is a horrible shock of heat!”

… and winter, for that matter

Sweden may be dark and cold in winter (and south of Stockholm 'snow' usually means 'slush'), but it certainly knows how to make the best of it with those Christmas lights in every window, Lucia saffron buns and weird-tasting julmust. “The white lights and candles in the winter bring me joy,” gushed American reader Kimberly Hart-Douglas. Why is that stranger talking to me?!

Many foreigners still remember the first time they addressed a Swede in an elevator and got a scared and shocked look as if they had told them they were going to rob Ikea. So it is interesting how quickly you get used to avoiding your neighbour or not saying 'hej' in stores.

But going home to enjoy a bit of small talk can be nice too. “When I return home to the United Kingdom I can't believe there's a pub five minutes down the road, selling reasonably priced pints with plenty of people to talk to,” one Briton told us.

Getting too relaxed about safety

“Every time I come home from my one-two-month stays in Sweden, the Swedish 'freedom' gets to my head and I tend to be careless back in South Africa. Not locking my doors, leaving valuables lying around, not locking my car,” wrote the South African reader above on Facebook.

Sweden's more than just meatballs. This was one of the main things readers of our French sister site listed when asked what they missed about France – but interestingly, it popped up among our readers too.

“I miss the fresh, delicious food – smoked trout, limpa bread and other baked goods,” said a Californian reader reminiscing about the Swedish cuisine. Conversely, another US reader who did claim he missed Sweden a lot said that one of his biggest reverse culture shocks back home was suddenly having “too many choices” at the grocery store. How much do you miss cinnamon rolls abroad? Photo: Hasse Holmberg/TT

Tell us if you find ladies/gentlemen toilets weirder than unisex toilets, and we shall tell you how long you have lived in Sweden. But jokes aside, Sweden's famous gender neutrality and equality does seem to have made an impression on our readers even after leaving the country.

“One sad shock is the sexism in Spain, that women are 'cat called' there just by walking on the streets, and that never happens to me in Sweden. I used to be 'used to it', but not anymore,” a female Spanish reader commented on The Local's Facebook page.

READ ALSO: Moving to Sweden has made me more feminist

Stop being so noisy!

Many readers tell us that when they first move to Sweden they train themselves to keep their voice down to avoid being labelled “that loud foreigner”. The danger, of course, is that when you return home you become “that person who lost her voice on a visit to Sweden”. A reader from Spain said that she nowadays find the noise level in restaurants back home too high.

What happened to all the attractive people?

It is not for nothing that Swedes, men and women alike, are regularly voted some of the world's most beautiful people. A British reader said that although he would not necessarily tell anyone back home, he admitted that his first reaction going back to the UK was: “Why is everyone so badly dressed?”

… or just style in general?

Swedish design has been setting trends for years, and we're not just talking about Ikea. Filippa K for clothes, String for furniture and that Ulrica Hydman Vallien bowl in Monica's apartment in Friends (apologies to our younger readers for that 1990s reference).

“I love the Nordic aesthetic, so I miss the fun, printed textiles and simple furniture design,” said an American reader about the sleek style of Swedish homes and offices. Leaving Sweden? Get ready for your boss suddenly expecting you to stay late to finish work and forget about taking that entire year (and more!) off for maternity or paternity leave.

It's not just that, but depending on where you live you may have to readjust your entire body clock, from the Swedish early dinner at 5-6pm to the Mediterranean late meals.

“The late schedules are the worst, when eating, and when going out, everything is super late there,” commented Nerín from Spain. “Because of the hours of work in Spain it is difficult to meet my old friends every time I go. In Sweden schedules are more relaxed and there is more time for occasional fikas.”