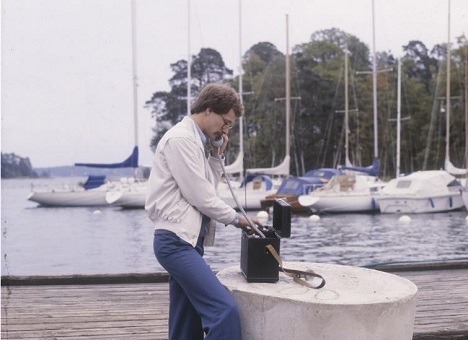 Have you heard of Nordic Mobile Telephony, NMT?

Probably not. But without it, you might not be able to call home to another country the way you do today.

Back in June 1969, top executives from the Nordic countries’ telecom administrations gathered in Lofoten in the Norweigan archipelago for their 34th conference.

One of the Swedish representatives, Carl-Gösta Åsdal, Chief Radio Engineer at Televerket (now TeliaSonera), came with a bold suggestion: He wanted to join mobile telephone solutions between Nordic countries, so Danes, Swedes, and Norwegians could all call each other. It wasn’t possible at the time. Can you imagine?

The committee decided to form a subgroup with the mission to “explore the opportunities for standardizing the signal system for selective calls using existing public mobile telephone services.”

On Saturday the technology is 35 years old. It might not seem like a big deal, but it is. Imagine how much harder it would be to spend two years in Sweden if you couldn’t talk to friends and family back home. (There are, of course, other innovations which have made that possible, like the internet – but we’re talking before that!)

It all grew out of the idea to enable easier communication between the Nordic neighbours: mobile devices that could connect people in the large, but sparsely populated north.

But it took time to get there, and effort to convince decision makers.

“At first, the one making the call would have to know where the telephone receiving the call was located,” said NMT’s Thomas Haug, who helped push through the technology several decades ago.

“You also had to memorize 14 digits,” he added. And let’s face it, how many people want to do that?

In 2013 Thomas Haug became the first Swede to receive the Draper Prize, sometimes referred to as the “Nobel Prize of technology” and awarded annually by the American National Academy of Engineering. He has been recognized as one of the key pioneers of NMT.

“I'm very honoured to be a prize recipient since we were several persons involved from the operator as well as manufacturer side in developing the first mobile systems which few realized the full potential of at the time,” Haug said at the time.

According to Haug, NMT “is the template for today's mobile communication enabling people to communicate and access information almost everywhere and anytime”.

Haug played a critical role in pushing the company to keep researching even though progress was slow. Many had a hard time seeing the need for such technology at the time, partly because there was nothing to compare it to. But Haug helped convince superiors to keep going and to develop a marketable product.

And when the “010” prefix was introduced, the system was able to keep track of the mobile devices, and people could call across borders without having to indicate the location of their receiver.

Suddenly, NMT was close to a breakthrough. Area codes were in.

“We started sending out quotes to industries, and the first base stations were actually Japanese, made by Mitsubishi,” Haug said.

Swedish counterpart L.M. Ericsson was at this point still hesitant to support the revolutionary technology, but after some negotiating, they decided to invest in the idea and expand the network with their own equipment.

So on October 1st, 1981, at Televerket’s switch in the Stockholm suburb of Hammarby, NMT officially launched the service.

NMT would be first in the world to offer this mobile service with a projected expansion to half a million users within 10 years.

The word mobile is relative, of course. Take a look at these early mobile phones, from Swedish company NMT's own archives: Not quite as snazzy as an iPhone, is it?

But actually, the Swedes weren’t the first to have mobile phone service.

Customers in Saudi Arabia were, thanks to an unexpected contract L.M. Ericsson sealed with the Saudis in cooperation with Philips.

While the NMT technology was used in Saudi Arabia, it took another month until modern mobile phone service was launched in Sweden.

And within a year, NMT had 35,000 subscribers, and counting.

From then on, there was no stopping the phenomena that has become modern mobile telephony.

“Stores specializing in gadgets and accessories started selling phone mounts for cars,” Magnusson said, “and people would install those to make others think you had a mobile phone.”

NMT eventually started its decline, however, parallel to the development of a new standard, GSM, which would soon claim the leading position in the mobile world.

By 1997, the two systems each had one million users around the world–more than double the estimate originally thought to be wildly optimistic.

“Sweden and Ericsson have NMT to thank for an incredible number of things,” Johan Wibergh, Head of Business Unit Networks Ericsson, told the NMT pioneers.

“You have contributed to the fact that five billion people today have telephone service.”

“We are only in the beginning of a very long journey,” Wibergh added “Eventually, everything that benefits from being online, will be.”