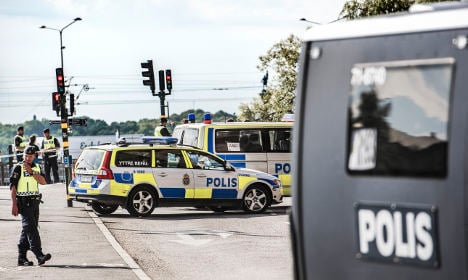 The Swedish Police Union's comments follow the release of a government commissioned report from the Swedish Agency for Public Management (Statskontoret) into the reorganization of Sweden’s police.

Sweden previously had 21 county police forces, a National Police Board and National Laboratory of Forensic Science, but they were merged to form the Swedish Police Authority in January 2015.

The new body is headed by a government-appointed National Police Commissioner. Dan Eliasson, a former director of the Migration Agency and Sweden's Social Insurance Agency, is the first to take up the position.

The report into the merger is critical of, among other things, how new managerial appointments have been made, and says that local police work has not been prioritized sufficiently.

While the police union said it shared many of the conclusions in the study, it does not believe it is sufficiently critical.

“The danger in failing to realize that the police is in crisis is that sufficiently strong action to get out of it is not taken. Right now it is unclear who should take decisions and on what grounds, and that creates a problem in operational police work,” Swedish Police Union chairwoman Lena Nitz said.

The new merged authority is organized into seven regional subdivisions: North, Central, Bergslagen, East, West, South and Stockholm, and the merger has already caused some hiccups.

Last summer, patrols in the huge North region were sent to the wrong destinations on call-outs due to a lack of knowledge of the local area from employees at its regional command centre.

“From the beginning we have been critical that the biggest reorganization of the police since the 1960s has been launched without having managers in place throughout the whole organization. That has hurt the implementation of the new organization,” union head Nitz explained.

In contrast, the union which represents graduates working within the police, Sweden’s Confederation of Professional Associations (Saco), was less critical, saying it considers the report to paint a “nuanced picture of the situation in the police authority and the challenges it faces”.

This week’s report is the first of three into the changes at Sweden’s police, with a second due in a year, and the third and final installment to be released in the autumn of 2018.