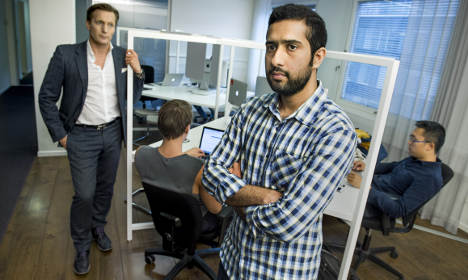 Tayyab Shabab (centre) is being forced to leave Sweden due to an admin error. Photo: Claudio Bresciani/TT

Pakistan native Tayyab Shabab is described as a ‘world class’ talent by his employer, Stockholm-based app producer Dynamo. But despite his steady job in Sweden, he recently had an application for a work permit extension rejected because a previous employer forgot to take out occupational pension insurance for him.

Major names in the tech community including Spotify founder Daniel Ek have since rallied behind Shabab, and an online petition arguing that he should be allowed to stay in Sweden has been signed by thousands.

For many, his case is seen as symptomatic of how Sweden’s migration rules are not flexible enough if the country truly wants to be one of the world's startup capitals.

On Tuesday, the “Back Tayyab” event at the Stockholm Chamber of Commerce drew a wide range of noteworthy speakers, who expressed their support for the developer. One representative of the tech world was Spotify head of HR Katarina Berg, who made a speech.

There was also a political presence at the event, with Swedish Liberal migration spokesperson Fredrik Malm and Centre Party economic spokesperson Emil Källström both speaking.

Our country needs to work to maintain its position in world, not least after Ericsson redundancies says @emilkallstrom #backatayyab

Non-profit organization Centre for Justice meanwhile announced that it would help Shabab for free in his legal fight to avoid deportation.

By Tuesday morning just under 7,000 people had signed the petition asking for Shabab to be allowed to stay in Sweden. Its target is to reach 10,000 signatures.

Sign a petition asking the Swedish government to back Tayyab Shabab here.