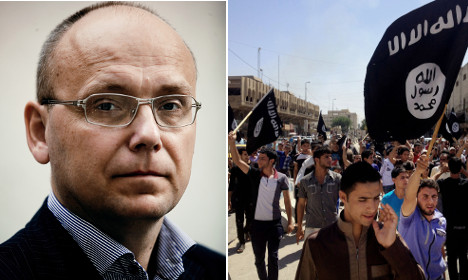 In Niklas Orrenius’ new book The Shot in Copenhagen (Skotten i Köpenhamn) the author argues that the threat of jihadist terrorism has been underestimated in public debate over the years. That has even caused discussions over how real the threat from jihadist terrorism towards Sweden really is.

Some point out that the unsuccessful suicide bomber on Stockholm's Bryggargatan in December 2010 was the only time that a jihadist terrorist attack has occurred in Sweden.

The argument is that he was an amateur, alone, and only “a danger to himself”. But that image is false.

As SVT’s investigative program Uppdrag Granskning proved about the incident last year, his bombs were advanced, and as such, he had likely been trained in bomb-making.

The investigation did not manage to get to the bottom of his international contacts (he had travelled to Iraq for terror training). If Taimour Abdelwahab had managed to detonate both his car bomb as well as the bombs in his two rucksacks however, many lives would have been lost.

Perhaps then the debate would have been different. We had a guardian angel on our side that day.

If we stick to the facts, it becomes quite clear that we have a problematic jihadist environment here in Sweden. Two weeks after the Bryggargatan explosion, four Swedes travelled south to Copenhagen with automatic weapons, pistols and 200 cable ties in their possession.

They were going to shoot their way into the Jyllandsposten newspaper and attack the editorial staff. They were sentenced to 12 years in prison by Denmark’s appeals court.

In Scandinavia, Lars Vilks (the Swedish artist who gained international notoriety for portraying the Prophet Muhammad as a dog), Jyllandsposten and individuals linked to Danish cartoon drawings have been the target of at least eight different terror plans.

Osama Krayem from Rosengård, Malmö is currently remanded in custody and charged for his alleged involvement in the terror attack in Brussels earlier this year.

I haven’t even named Mirsad Bektasevic from Gothenburg, who was arrested in Sarajevo in 2005 and sentenced for planning a terror attack when he constructed a suicide vest with 19kg of explosives. Or the 304 individuals who the Swedish security police confirmed are abroad working with Islamic State.

In the probable event that Isis is now going to collapse, more people will likely return to Sweden, and a few of them represent a possible attack threat.

For over 10 years I have warned about the development of these jihadist environments. So let’s not ignore the reality any longer.

There are many explanations for why a curtain has been drawn over the debate.

A general lack of knowledge and a fear of touching on religion in social debates has been strengthened by activists, who have opportunistically seized upon that fear for their mobilization purposes.

Through claiming that it “stigmatizes Muslims” the door has been closed on the debate, time and time again.

A key problem is that the debate does not separate different aspects: Islam as a religion, Islamism as an ideology (which can be non-violent) and Takfiri jihadism (the interpretation of Salafi jihadism which Isis and al-Qaeda are based on).

Muslims are not a collective, rather, they are a mosaic of all kinds of different faiths, religions and backgrounds. We must stop generalizing, stop being scared to touch on religion, and take off our blinkers to start a fact-based debate from now on.

The fact is that Takfiri jihadism’s followers are extremely few. Muslims are the biggest victims of the Isis murder machine.

To end the polarization we must also not fall into the trap of speaking about “stigmatizing Muslims” at every turn – that false generalization only strengthens polarization.

Speak instead about Takfiri jihadism and start to understand that normal Muslims already get that distinction.

It is high time that the media and the rest of the majority of society got that also.

This is a translation of an article written by Magnus Ranstorp first published in Swedish by SVT.