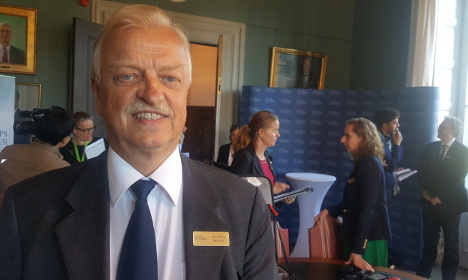 The Nobel Prize in Chemistry 2016 was awarded jointly to Jean-Pierre Sauvage, Sir J. Fraser Stoddart and Bernard L. Feringa “for the design and synthesis of molecular machines”.

The Local's Lee Roden spoke to Nobel judge Jan-Erling Bäckvall, Member of Royal Swedish Academy of Sciences and professor of Organic Chemistry at Stockholm University, to find out more.

“For me it’s very exciting, especially when you have created them from scratch. There are motors in nature, biological motors, but if you start from building them by synthesis, molecules – you couldn’t control the movement of molecules before these discoveries. Now you can actually make them rotate, not only in one direction, you can induce a motion in a molecule. This is ground-breaking.”

By definition, because of the size this must be an incredibly delicate process?

“Of course. They are probably as small as things can get, I would say. If you think about transistors and other devices we have they are much, much larger. If you made computer memory this way, for example, it would be as small as you could possibly make memory. If you make them efficient you could have a huge amount in just a tiny little piece. I think today I’m impressed by the memory capacity of a microchip that holds gigabytes, but here you’re talking a huge magnitude more.”

One of the winners, Bernard Feringa, mentioned the potential to use them to inject into a bloodstream to find cancer cells. How realistic is that, and how far away are we from it?

“If you can ask a molecule to react on certain stimulae when they pass close to a cancer cell, it’s thinkable. It’s still a speculation of course and we don’t know if it can be realized, but there is something to it.”

Are there any other standout potential practical uses of it you can think of?

“I thought about the effect you get. [Feringa] mentioned the effect you get with one single molecule. If you make a mole – a form of measurement used in Chemistry corresponding to the mass of a substance containing the same number of units as there are atoms in 12.000g of 12C – if you go and, with the effect you have in one molecule, make it into one molar molecule, it would be an astronomical effect. That would maybe be something we haven’t seen before.”

“The other thing is to store memory for computers. The other would be to store energy itself and release it later.”

The breakthrough was compared to when we first figured out how to make a machine fly. Does this have the potential to have the same impact?

“It could be. If someone asked if we could make a machine fly before they would have said ‘we don’t know’, of course, so I have to say the same thing now. But I’m excited about the potential, I think it can have the same groundbreaking effect as electrical machines and airplanes.”

Could the machines have any potentially dangerous use in the future?

“I don’t feel so afraid about it so far. I haven’t seen any possible application where it could be dangerous. If you’re talking about robots, on a larger scale there we can see some danger, but here on the molecular level, not yet.”

Do you know any of the winners personally, and can you tell us anything about them?

“Ben (Bernard L Feringa), yes. He’s a very good scientist, his work is also in the same area as me, as well as other areas. In organic chemistry and catalysis. He has a wide, broad competence in chemistry.”

One theme about the prizes this year is though the discoveries are incredible in their own right, they also open up entirely new ground for others to build upon. Is that important?

“It has already opened up a big world because there are a bunch of other people doing the same things now. There is one guy, Jim Heath, and others who have built molecular machine cars. They’ve tested it already, it works, so it has already started. Now of course, the prize will make it even moreso the case, and intensify it.”