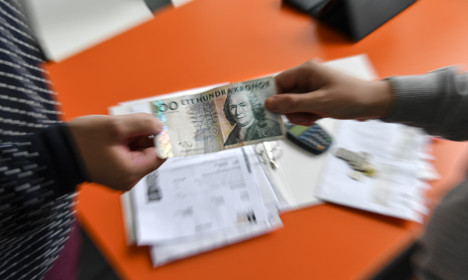 Household debt in the country is now said to be growing at an annual rate of 7.3 percent – an alarming pace, according to Jens Magnusson, a household economist at SEB.

“There is every reason to keep an eye on developments. Debts can’t be allowed to run away for too long,” he told SvD.

SEB says that one of the main causes of the debt growth is an increase in mortgage loans, with the Swedish central bank’s (Riksbank) record low interest rates causing house prices to increase.

The recent introduction of rules forcing lenders to amortize on their mortgages meanwhile – designed to help stabilize the country’s economy and temper levels of household debt – are believed to have given a boost to the housing market in the period before it was introduced as Swedes scrambled to buy homes before the changes kicked in.

In May, leading ratings agency Moody’s warned that high levels of household debt is still a major challenge for Sweden, where the average debt of a mortgage holder was said to be around 366 percent their annual income.