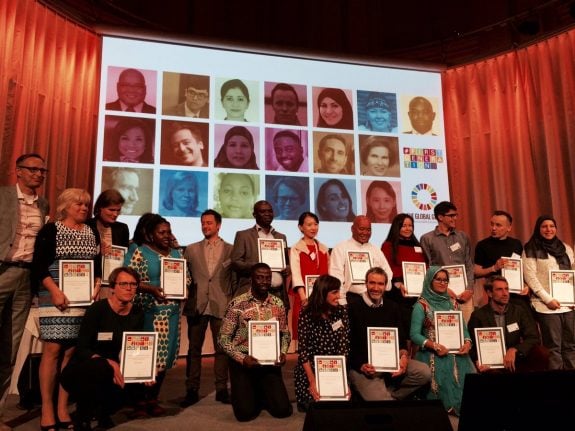 If you have been to any large event attended from people all over the world where sustainability is involved, you've probably heard something about our generation. Our generation – those of us who are living now, today, and even more importantly the children and teenagers who are growing up now – are the last to be able to truly make a difference in halting climate change and saving the environment.

But there's a positive aspect too: we are the first ever who have the capability to eradicate extreme poverty.

That's the concept which sparked the #FirstGeneration campaign, launched by the Swedish Ministry for Foreign Affairs, which culminated in an inspiring conference in Stockholm this week.

“Through #FirstGeneration, we aim to celebrate and draw inspiration from the creativity of the younger generation, and at the same time build networks for the future,” a press release about the event stated.

“It is essential for global development that the leaders of tomorrow build global networks today to exchange knowledge and experience.”

One example of such global networks being built, for and by the leaders of tomorrow, is of course the SI Network for Future Global Leaders.

#FirstGeneration was yet another embodiment of Sweden’s dedication to building bridges and connecting people around the world to create a brighter tomorrow.

Swedish embassies around the world were asked to find and invite “brilliant and inspirational” people from their countries to attend the Forum this week. Inspirational speakers from Bangladesh, the Marshall Islands, Canada, Austria, Rwanda, Tanzania, Angola, and Argentina were just a few of many who gathered in Stockholm to discuss how young people's engagement is key to achieving the UN's Sustainable Development Goals.

The Forum was moderated by young Swedish YouTuber and author Clara Henry, Sweden’s first youth ambassador for the Global Goals, who is highly engaged in the issues.

“There is nothing more inspiring than seeing young people with drive and engagement on human rights and the Global Goals,” she said.

A special award was also created to highlight the role of educators and those who inspire others. The #FirstGeneration Award, granted “for inspiring young people to achieve the UN Global Goals for Sustainable Development,” was signed and awarded by Swedish Deputy Prime Minister Isabella Lövin to the participants from around the world.

Pedro Vemba Cidade, a lecturer from Angola Methodist University, for example, was given the award for his work leading a volunteer campaign to plant trees and install sewage gutters in the Luanda neighbourhood of Samizanga.

Lutfa Akther, a doctor from Bangladesh, has been motivating and inspiring young people towards UN Global goals 3 and 5: good health and well-being as well as gender equality. Lutfa has worked in Bangladesh with contraceptive counselling and helping women achieve a better reproductive life.

Alson Kelen from the Marshall Islands is all about the sea, canoes and inspiring young people. #FirstGeneration #GlobalGoals pic.twitter.com/MJPm7oW2iF

Edmond Umuvandimwe from Rwanda teaches his school students about peace and values, and Habiba Al Marashi from the United Arab Emirates is engaging younger generations to get involved in sustainability to save the environment.

The Swedish Minister of Equality, Åsa Regnér, as well as the Minister of Environment, Karolina Skog, also participated in the event, which took place at the City Conference Centre Norra Latin – where the SI Network for Future Global Leaders had its own kickoff event just a few weeks prior.

You can read more about the change-makers from around the world, and how they are meeting UN Global Goals, here. You can also watch the event filmed.

Celebrating yesterday's success! Thank you to everyone who was a part of the #FirstGeneration Global Goals Forum! pic.twitter.com/7aZL3bcc5l

So how do you want to change the world? It doesn't have to be something big – even small changes can make a big difference.

Get in touch and let us know your thoughts, who inspires you, or how you are trying to inspire others to make the world a better place.