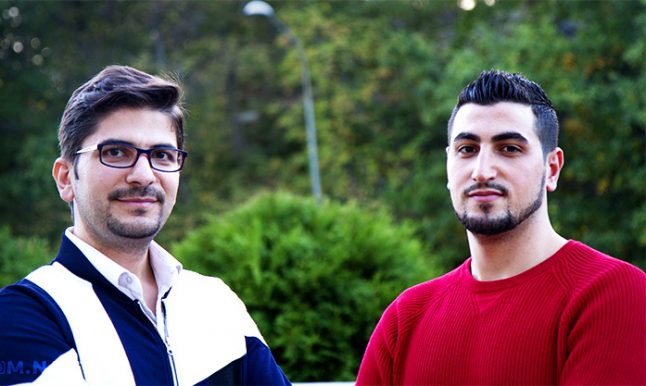 He decided to learn Swedish on his own and learn how to get by in his new community. It wasn’t acceptable for him to end up living in Sweden long-term, but not know what köttbullar are (Swedish meatballs).

Barood believes that most refugees don't follow Swedish media, and the media is unable to engage them, due both to the listlessness of some refugees, and a lack of effort from the local media.

Besides, most importantly the Swedish media used cultural codes which were hard for refugee communities to comprehend.

“After learning Swedish and making many friends, I started participating in ‘integration’ initiatives, which were seeking relentlessly to help refugees – but struggled to catch their attention. I visited asylum camps with a few initiatives, such as the ‘welcome app’ that matches refugees with Swedes, and found that many refugees were depressed; they seemed to have lost hope,” Barood remembers.

“Many refugees both in the asylum camps and outside know very little about the societal activities, and some are still living as if they were in the Middle East, within their small communities,” he adds.

“Both refugees and the Swedish media are to blame for this dissonance.”

Barood and a Moroccan friend named Mohammed, whom he met in an SFI (Swedish for Immigrants) class, decided to help refugees get the information they needed. They started promoting the initiatives and other activities aimed at refugees, in a filmed series called Shababek, which broadcast monthly episodes in Arabic with the aim of helping refugees to socialize more easily.

'Shababek' is an Arabic word meaning 'windows', and the series aimed to offer refugees a window onto Swedish society.

“We decided to do this using social media, which is the refugees’ main source of information, to fill part of the gap which Swedish media can’t seem to fill. Our first episode was in May and we talked about an organization called ‘Rosa Stationen’. The organization offers asylum seekers Swedish classes, with free transport from and to those classes,” Barood explains.

“Some refugees might already know about these initiatives, but may not take them seriously,” he adds.

Nevertheless, his attempts were fruitful, and after broadcasting the first three episodes, many newcomers got in touch to tell him that they were thankful for his effort, and they hadn't heard about these initiatives previously. They asked him to shoot more episodes.

“It’s very basic: in Sweden or any other country you need to know people, to live properly you need to have contacts,” stresses Barood.

“Staying out of the herd, living encircled by the same community you are familiar with won’t help you. You need to open up to Sweden.”

Shababek started out as a 'selfie video' filmed on Barood’s mobile phone, when he and Mohammed walked through Gamla Stan (Stockholm’s old town) to practice Swedish. Now, it is supported by an organization called Bilda which offered to supply the pair with all the equipment needed in order to continue their programme.

However, he believes that in order for the Swedish media to convey a meaningful message and become the direct source for the refugees’ information, they must communicate with the refugee community by using the community's own cultural codes, rather than Swedish ones.

“I wish they could try to understand our mentality, and try initially – until people become better integrated – to address the refugee community in the way they communicate between themsleves,” he adds.

“For example, when it comes to colours, the Swedes may use very simple colours in their advertisements – as in their life. This may not appeal to a large part of the refugee community, who are more likely be attracted to strong, energetic and passionate hues.”

It’s inconceivable for Barod that among the nearly 160,000 refugees entered the country in 2015, Swedish media could be reaching barely five percent of them, leaving the newcomers unaware both of current events in the country, and its traditions.

“I was staggered when I asked a guy who had been in Sweden for two years if he had tried köttbullar, and he simply answered: what is köttbullar?”