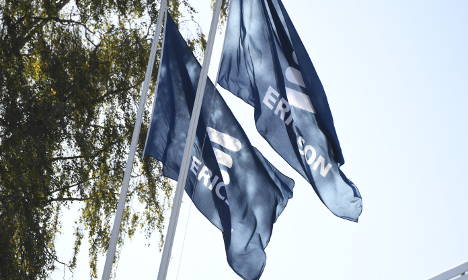 Ericsson shares, which have lost more than half their value in the last 18 months, plunged around 16-18 percent shortly after trading opened in Stockholm, as the company's warning that its third-quarter profits would significicantly miss target sent shockwaves through the Swedish business community.

“The forecasts and expectations on Ericsson ahead of the report were low, really low. That they would surprise on the negative side, that comes as a big surprise to me. Especially that it is by so much,” Joakim Bornold, savings economist at Nordnet, told the TT newswire.

Sales sunk 14 percent between July and September compared to the same period a year earlier, to 51.1 billion kronor ($5.8 billion), Ericsson said in a statement on Wednesday morning.

“It's bad for Ericsson as a company, but they are evidently also in a very, very tough market. Not only are they losing market shares, the whole market is declining. It is unfortunate that they are in such a tough market right now, when there is so much going on internally,” said Bornold.

The corporation is in the midst of a major overhaul, and earlier this month announced it was cutting 3,000 jobs in Sweden.

At a press conference on Wednesday, its current CEO Jan Frykhammar said he was focusing on carrying out an ongoing cost-cutting programme for the time being, but warned that some of the measures could be extended further down the road.

“We're in a situtation where volumes are declining, so we obviously have to adjust our costs. That is clear,” he said. “We can provide more details at a later stage, but it is a given.”

Ericsson fired Frykhammar's predecessor Hans Vestberg in July after seven years in the post. During his tenure, it struggled against competition from rivals Nokia, Siemens and Alcatel-Lucent and failed to make inroads in saturated and competitive markets such as Europe and North America.

Asked about the Swedish giant's future, Bornold told TT: “Ericsson definitely has a future, but it is highly uncertain if it has a future as an independent company. Unfortunately we are getting closer to a solution where Ericsson perhaps either splits, or that someone else buys it.”

“We probably have not seen the worst yet for Ericsson,” he added.