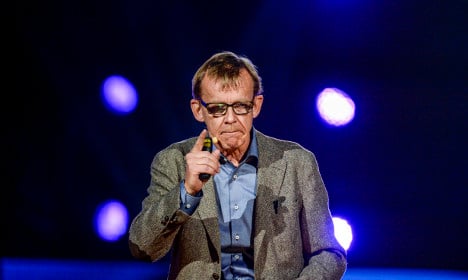 Rosling, who has given TED talks, became an unlikely global phenomenon in recent years and videos of his lectures have chalked up millions of views on Youtube.

According to Rosling and Nordenstedt, the figure first gained prominence in aid advocacy in late 2015 when the UNFPA (United Nations Population Fund) cited it, and it has since been quoted in a report by the UN’s Global Strategy for Women’s, Children’s and Adolescent’s Health, and even made its way into policy documents.

But after investigation, Rosling and Nordenstedt discovered that the stat, which originated in The Lancet, was based on poorly carried out calculations. According to the writers’ own calculations, it is a “fourfold” inaccuracy.

Nordenstedt told The Local that the continued use of the “60 percent” figure by major organizations could even be considered a lie.

“If it had been two times wrong you could perhaps call it carelessness, but the figure is at least four times too high, and I think that has crossed over into the boundaries of lies, regardless of whether it was negligent or deliberate,” she said.

“The effect is still the same: aid money designed to reduce maternal mortality is wrongly directed to refugee camps and crisis areas instead of the grey, boring, extreme rural poverty in areas in sub-Saharan Africa or in India.”

The article noted it is “surprising” that the inaccurate figure managed to make its way into a highly qualified panel at the UN, and warned that global health has entered a “post-fact era”, “where the labeling of numerators is incorrectly tweaked for advocacy purposes”.

Nordenstedt reiterated that sentiment in her comments to The Local:

“The strange, scary thing is how the figures, just by slipping into The Lancet and being given credibility, then spread and spread because it suits the narrative we see much of today in newspapers around the refugee crisis and migration, and the hope is that through connecting maternal mortality to humanitarian crises it can attract more money.”

Rosling and Nordenstedt’s article concluded that the use of inaccurate numbers in global health advocacy “can misguide where investments are most needed”, and on Friday, the Karolinska assistant professor advised that more fact checking is needed in the area:

“This example shows that there is a need for fact checking within global health to guide the right prioritization. A lot of aid money is going around, and to achieve the best result (in this instance to reduce maternal mortality as effectively as possible) that aid money must be distributed correctly.”