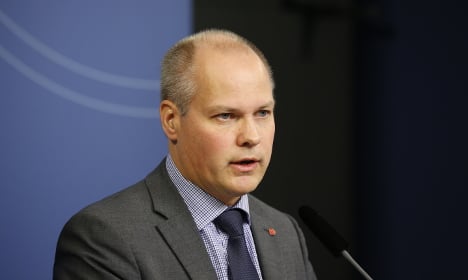 By September, 22,330 people had sought asylum in Sweden this year. In the same period, the Swedish migration authority (Migrationsverket) processed 71,651 cases – up 76 percent from 2015.

Just over half (53 percent) of the applications processed during that time were granted.

Between January and September, 15,521 people left Sweden after their application was either rejected or withdrawn. That was a 66 percent increase compared to 2015, Johansson wrote on Twitter, citing Migrationsverket statistics.

In September 2016 alone, Migrationsverket processed 13,616 asylum cases, the highest number ever in one month.

In the period between January and September this year, 23,173 Syrians were granted asylum in the Nordic country. Sweden has taken in 138,000 Syrians since the war in Syria began in 2011.

Sweden received a record 163,000 asylum requests in 2015. Last month, migration minister Johansson spoke of his fear during the peak of the refugee crisis that thousands of people could have ended up sleeping on the streets in freezing temperatures.

“Every morning when I woke up I would go into the migration agency's website and look at how many places we had to fill. Were we going to make it through that day?” he said.

The Swedish government has tightened its asylum policy significantly in the last 12 months, including the introduction of photo ID border checks and temporary residence permits