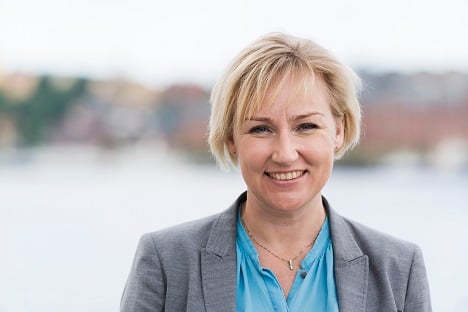 Did you know one woman is in charge of funding research and higher education in Sweden? We sat down with Minister Helene Hellmark Knutsson to find out what the hardest part of her job is, what she wants to change, and why she thinks everyone should study abroad.

Describe your role. What is your most important task?

I am the Minister of Higher Education and Research, so that means my job is to take care of the universities and the colleges, or university-colleges – we have both in Sweden – and also to handle research funding.

We have 31 public universities or university-colleges in Sweden, which we fund. But we also fund the independent ones, foundations or private institutions. There are not very many; we have perhaps six big ones and between 10 and 15 in total, but some only provide one or two educational programmes so they’re quite small. But all higher education in Sweden is tuition-free for citizens, so those institutions are also publicly funded.

How is Sweden’s higher education policy actually formatted – who does what?

We have agreements – I believe it’s called public service agreements in English – between the Ministry and all the institutions, which are renewed on an annual basis.

So basically we have a budget, that the parliament decides on, and after that we have discussions. We also have a continuous dialogue, and at least once a year meet with vice chancellors and the board and chair persons of the institutions of higher education.

What is the hardest part of your job?

The hardest part is to find the funding! But we have very high confidence in higher education and research, and so does the public.

The other half goes to the research agencies that fund, for example, health research and things like that. But it’s still my responsibility to make it all come together. Health research is not steered by the Ministry of Health; it’s our job.

So what’s next? What are you working on right now?

This year, about one and a half month from now, we are presenting the next research bill to the parliament. We have been presenting these bills since the 1980s, and they usually have a four-year perspective. But this one will have a ten-year perspective; this is new. We are trying to think long-term.

Why is that, why do it differently this year?

We think that we have to. We invest a lot of money in research, and Sweden is a top research nation: we have great universities and very strong research.

But we see that other countries like Denmark, the Netherlands, and Switzerland invest similar amounts, or even less than we do, but that they get more out of their research. We believe we need to both increase the fundamental funding to the universities, in order to get better and recruit more young researchers. But our institutions also have to take more risks when it comes to research.  They have to try to find the next big thing instead of just investing in research that they already know is good, research that has already reached its top level.

Furthermore, tenure tracks within universities must become more transparent and open. We see, for example, that a lot of recruitments are internal within a university. This is a big difference from the US, for example. Mobility is quite low in Sweden. I think something like 50 percent of researchers here are recruited from their own universities. We have to change this.

So this is why we would like to see a ten-year perspective, so universities can reorganize to be more competitive in research.

We are also working on increasing the number of places in universities and colleges. More funding can hopefully get more students into the universities and also help the labour market, where we know we have a lack of teachers, nurses, engineers, and other academic careers.

Structurally, we can actually give specific assignments to institutions, for instance to expand education or work with gender integration. A new assignment we gave institutions a year ago was gender mainstreaming, for example.

How do these changes and goals affect international students and researchers?

Having better and transparent tenure tracks will help to attract young researchers, including from abroad.

So now we are appointing an investigator to see how we can increase international applications, to see if we can implement more agreements with institutions outside the European union.

Is there any chance that the tuition fees be lifted?

It’s a bit early to say, but I don’t think we will go back to the system we had. That was also a part of the Swedish Foreign Affairs policy, you could say, especially when working with countries that are less developed.

But now we are in a different situation. We have a lot of students who are extremely interested in coming to Sweden, especially to some of our top-performing universities, like Karolinska and Uppsala and Lund, that are among the top 100 in the world. They are strong brand universities. So I don’t think the fees are as much of a problem.

But when I went to the United States a year ago and discussed this, people didn’t know that half of our master’s programmes were in English, they thought they needed to know Swedish to participate. But that’s not true.

Also, Sweden is a great place for studies because you can easily combine your programme with an internship at NGOs, public sector companies, etc.

I do agree, and this is one of the problems we are working on solving. We are conducting an investigation about this as well, how we can increase the number of Swedish students going abroad.

We especially want to look at professional programmes for teachers and nurses, what they can do abroad. I think it is very important that you have a part of your education in another country, to see how other people think about things.

If you are going to become a teacher or nurse in Swede, you are also going to contribute to developing the health system or the education system here, and it’s important that you also have experience from other countries to see what is different there, and what you can learn from others.

How do you react to the criticism from some companies that express concern that Sweden isn’t producing enough graduates with the right competence for the needs of the modern economy? What is being done to ensure that Sweden’s universities are giving students what they need to compete for jobs when they finish school?

We have had an investigation about this as well. Higher education institutions in Sweden are very independent, and they decide on their courses by themselves – but of course they take into account the desires of students and the needs of the labour market.

After looking at how they do this for the past 25 years, we have concluded that they do okay.

Particularly in terms of the labour market. We do offer great education for nurses and teachers – but when it comes to teachers, we have a lack of students. We need to increase the number of students who want to become teachers.

With nurses we have a slightly different problem; we have enough students but the problem lies at the next level of education, when you choose to specialize in certain areas, that is where we have a lack.

But when it comes to engineers, for example, we have a good balance right now. But we see that in the future we will have a lack if we don’t expand the number of students.

The demand of students who want to become engineers has been too low, and traditionally it has been only men and – especially the sons of other engineers – who have been the primary recruitment base. So we also have to broaden and widen the group of students.

We see that the number of women in engineering programmes has increased, but it’s still quite low. It has increased from maybe 25 percent to 35 percent. But that’s good; we are improving.

And this also why we have said to all the institutions that they have to work with gender mainstreaming,

It’s now half-time for the current government. What do you see as the government’s most important accomplishment in higher education and research thus far?

Of course one of our biggest accomplishments is that we have started to increase the number of places, but also that we have a new quality assurance system that is in parliament’s hands now. They recently approved it and now the responsible authorities are implementing this new quality system.

We also will have a new university. From 2018 we will have Malmö University. Malmö has been a university-college until now, but it will become a real university.

Alright, finally, for the researchers and students from abroad who are here in Sweden – what one thing do you think they should do while they are here?

Since I am from Stockholm, I would say they should go out into the archipelago here. I think the great thing with Stockholm is that nowadays it is a quite big city – not as big as many in the world, but still a really beautiful big city –  but built on the water. If you go out just half an hour by boat, out to the archipelago, you can see truly grand nature. It’s fantastic. If you are coming to Stockholm, that is the one thing you can’t miss. You have to see both the city life and this fantastic nature. Beautiful nature – that’s what we Swedes live for.