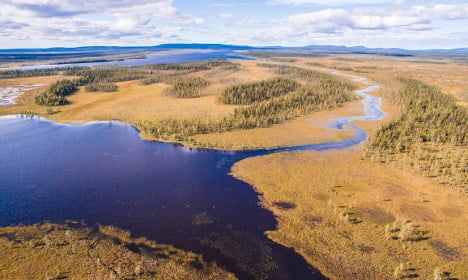 A still from the aerial footage of Sweden. Photo: Nate Summer-Cook

Swiss photographer Nate Summer-Cook used his drone to shoot aerial footage across Sweden from Skåne in the very south to Abisko, 1,868 kilometres away in the far north.

The results are spectacular, with the video about as comprehensive a highlight reel of Sweden’s incredible wilderness as you’re likely to see.

“My favourite places to shoot were both the Abisko and Muddus national parks. I’m a nature lover and the nature is just wild up there,” Summer-Cook told The Local.

“I’d been to Sweden several times already but never further north than Uppsala.”

The filmmaker spent two months in and around Sweden with his wife, and shot around four hours of drone footage in the country. He also filmed in Denmark.

“I’m a Sweden fan and jag vill lära mig Svenska (I want to learn Swedish). I have to admit, Copenhagen is an awesome city and I also love the beaches around Hirtshals and Skagen,” he said.

“But Sweden has the nice beaches too – and much more. As a Swiss guy I just need some mountains, maybe that’s why I really love the north of Sweden. The untouched nature is what I’m looking for and what looks best in my videos.”