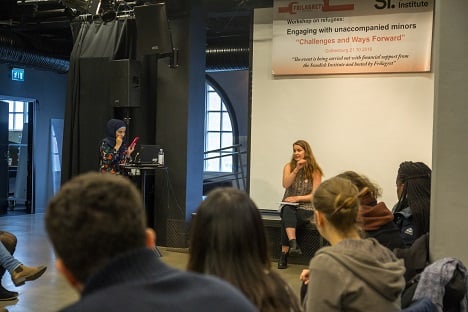 To understand this dilemma of refugees as a person or an organization is not an easy task, especially if you are neutral and objective and you want to make a change in the process rather than criticize governments or organizations.

My personal observation to the whole situation was that there are amazing efforts both organizational and individual are being done to make the best out of the situation, bridge the gap and complete the official support provided by the governmental institutions.

However, they are al not coordinated and lack a system where they can all plan, cooperate and strengthen each other.

I have been following the refugee crisis very closely from Palestine until December 2015 when I arrived to Sweden. It was the time for me to acquire in-depth understanding of what has been ongoing so far.

So, I volunteered in one of the meeting place/language cafés in Alingsås where I lived. Shortly after in February 2016, I was contacted by Human Rights Watch to assist in a mission to investigate the refugees’ situation in Sweden especially the unaccompanied minors in Gothenburg.

My job was to facilitate to interpret interviews from English to Arabic and vice versa. For me the job was even way more that this as I had a chance to meet with the youth, listen to their stories and most importantly connect with them.

And since I am a refugee myself, for the second time now, we could create bonds immediately and show compassion and empathy. It was rewarding for me and for them. I became friend with some of the children I met. I came across many of them in the city.

I realised that it was all about listening to them and showing them solidarity and support.

Throughout the period after, I used every possible networking chance to discuss this issue and see what can be possibly done to engage in the issue.

Luckily I am a member of SI NFGL and a YLVP-er so I have access to resources as an individual. So I was able to make a small proposal that makes use of all the knowledge I have, my expertise in the field of humanitarian aid and the diverse contacts working in this field.

Eventually, SI  granted me funding to conduct this event to support the network in Gothenburg, and this was so inspiring.

I have been part of many big organizations before but when you have the chance to organize your own activity on smaller scale, it is just amazing perhaps even more impactful.

I started communicating with relevant actors from Save the Children Sweden and the Swedish Red Cross to discuss the plan. They also supported me in making the concept and aim of the activity even more advanced.

Of course, there were many challenges during the communications process but I guess that is what it is all about if you are doing a joint activity. The preparation phase was the most interesting. especially that I was in Stockholm while the activity was conducted in Göteborg. but the power of networks worked like magic. The SI local network members were very supportive and I was glad that I merged this event to be part of the network plan in Göteborg promoting “one for all and all for one”!

When I talked to organizations, people and friends about this event they were all excited and thought it is meaningful especially that it comes from an individual. It was mostly interesting for university students who wanted to take part of the whole refugee issue but didn’t have enough knowledge and understanding.

The SI team in Stockholm were the most flexible and supportive of all because at times I really felt coordination wasn’t going the way I planned it so I felt down. They were open to changes and pushed me to make the event happen in the best possible ways. It gave me a lot of confidence and space to organize it with passion but also taking all SI guidelines into consideration.

In all, 15 alumni and university students took part in the event. It was interactive and engaging. There were 2 guest from the Swedish Red Cross, one speaker from Gothenburg University and an expert from Save the Children. The first session was to list out different challenges faced by the unaccompanied minors and the last session was a planning session to map the existing efforts and suggest what can be possible done after.

The overall impression of all participants that it was good and useful so I felt so happy to be able to contribute to this someway.