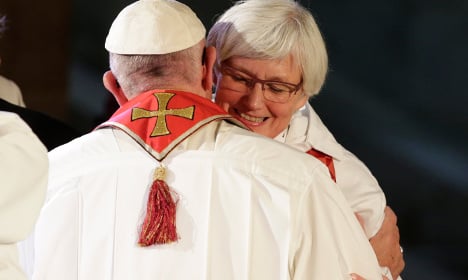 Pope Francis visited southern Sweden on Monday and Tuesday to mark the start of a year of celebrations for the Reformation – the dramatic 1517 event that created a Protestant branch of Christianity which rebelled against papal rule.

Sweden's Lutheran Church is among the most liberal in Christendom. A pioneer in women's and LGBT rights, it has been appointing female priests since 1960 (the sitting archbishop is a woman), a step the Catholic Church is still reluctant to take.

Asked by journalists on the plane home to Rome from Sweden on Tuesday if the Argentine pontiff had been influenced by his visit and meeting with the archbishop, he chuckled.

“I read about this area's history. And saw that there was a queen who was widowed three times and I thought 'this woman is strong',” he told a reporter from Swedish public broadcaster SVT.

“I was then told 'Swedish women are very strong, very talented. Perhaps that's why some Swedish men look for a woman from other nationalities',” he joked, adding: “I don't know if that's true.”

“But regarding the ordination of women in the Catholic Church, Saint Pope John Paul II had the last word on this and it stands, this stands,” he continued, referring to John Paul II's categorical rejection of the idea of women priests in 1994.

When pressed by the reporter if that meant women would never become priests in the Catholic Church he said: “If we read carefully the declaration by St John Paul II, it is going in that direction.”

He also spoke about Sweden's role in the refugee crisis. The Nordic country took in 163,000 asylum seekers last year, but has since tightened its asylum rules and borders – a move the ruling Social Democrat-Green coalition received criticism for within its own camp.

“I don't think that Sweden is cutting down on the number it receives out of egoism; if you do something like that it is because many today look to Sweden to welcome them. But the time needed to organize the reception of all is not needed,” said Pope Francis.

He reiterated his calls on governments to open its doors to migrants, but added that they had the right to assess their capacity to effectively integrate those arriving from abroad.

“I think that, in theory, you can't close your heart to a refugee,” AFP quoted him as saying. “Governments must be open to receive them, but also do the calculations regarding their reception [capabilities], because one must not only receive a refugee but also integrate them.”

Read more about the Pope's first day in Sweden in The Local's live blog.