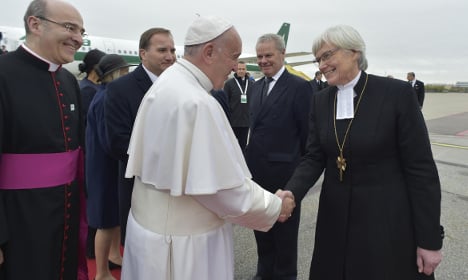 Pope Francis visited Sweden earlier this week to participate in an ecumenical service marking the 500th anniversary of the start of the Reformation, a move seen by many as a reconciliatory gesture from the Catholic Church towards protestant faiths like Sweden’s Lutherans.

On the flight home to Rome however he made comments that weren’t likely to go down well with Sweden’s liberal Lutheran Church, which has been appointing female priests since 1960 and has a female archbishop.

“I was told ‘Swedish women are very strong, very talented. Perhaps that’s why some Swedish men look for a woman from other nationalities’. I don’t know if that’s true,” he told Sweden’s public broadcaster SVT.

“But regarding the ordination of women in the Catholic Church, Saint Pope John Paul II had the last word on this and it stands, this stands,” he added, referring to John Paul II’s rejection of the idea of women priests in 1994.

On Wednesday, Swedish Church Archbishop Jackelén responded that the Pope may not have a fully balanced outlook due to his surrounding environment.

“Living in a single-sex environment may not make it so easy to in all aspects achieve a balanced view of humankind,” she told SVT.

“The position the pope expressed is well known – it always has been. But it’s to do with a difference in approach to the office. It’s important to be aware that the differences are to do with differences in the office and not a question of male or female priests.”

“You can’t say that from a Catholic perspective male priests are more accepted than women. It’s a part of patriarchal thinking and has nothing to do with theology. In a similar way, from the Lutheran side there is a difference in the understanding of the papal office.”