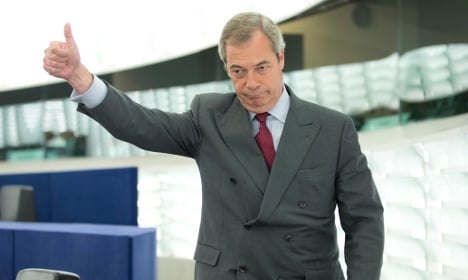 Nigel Farage is speaking at a far-right event in Stockholm on Friday. Photo: AP Photo/Jean-Francois Badias

Stockholm’s iconic five-star Grand Hotel has been hit with a string of one-star reviews on its official Facebook page, after it was announced that the far-right Sweden Democrats (SD) would hold their “European Freedom Awards” there on November 4th.

“Give the Grand Hotel one star and preferably also a reason for why, as well as an invitation for any possible future guests to stay away from a hotel which puts private profit above condemning and distancing itself from racist, fascist and neo-Nazi organizations,” wrote one user.

“My stay here was awful! I was continually awoken by the sound of hundreds of men in white hoods goose-stepping at all hours of the night!” wrote another.

SD originally tried to hire out the Blue Hall at Stockholm’s City Hall for their gala – the location of the real Nobel Banquet – but the request was rejected for security reasons, and they then opted for the Grand Hotel instead.

Along with Farage, SD leader Jimmie Åkesson is due to speak, while a prize will also be awarded to someone the party describes as a “former head of state in Europe” for “the political pursuit of increased national self-determination in Europe”.

Swedish fashion site Metro Mode, which had been set to hold its own event at Grand Hotel on Friday evening, decided to cancel and move it to another hotel in Stockholm at the last minute in protest.

After writing about the decision in a blog post, its editor Petra Tungården reiterated to The Local that she was worried about “how the Sweden Democrats make Stockholm and Sweden appear in the rest of the world. And that they through this gala make Stockholm a gathering point for racist groups around the world”.

“I think this is a very good hotel. They don't differentiate between their guests based on their political opinions, just as it should be in a democracy,” wrote one five-star commenter on Facebook.

Grand Hotel is owned by investment company Investor, which is controlled by the wealthy Wallenberg family, whose arguably most famous ancestor is Swedish World War Two diplomat Raoul Wallenberg.

Its marketing manager Philip Odelius said he was aware of the reviews, but they were not something he had discussed with his colleagues yet because the wave of comments unfolded over Thursday night.

“It’s obviously disappointing to get bad grades, but it’s an open forum where one can think freely,” Odelius told news agency TT.