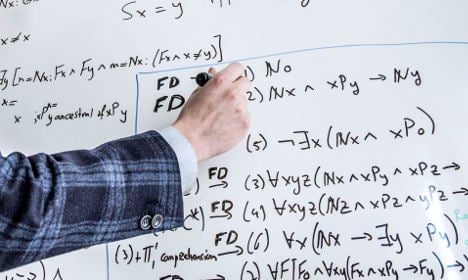 We don't know what any of that means either. Photo: Tomas Oneborg/SvD/TT

One of the requirements of Mensa membership is to achieve a score over 130 in its standardized IQ tests. The average score is around 100, and only two percent of applicants manage to earn the necessary number to join.

“You measure mostly logical and mathematical ability, for example how to see patterns without having any previously learned knowledge,” Mensa spokesperson Jenny Åkerman told Swedish newspaper Sydsvenskan about the tests.

So which Swedish cities boast the most Mensa members? Unsurprisingly, capital and most-populated city Stockholm has the largest number (565), followed by second city Gothenburg (359), then university city Uppsala (201) and southern Swedish hub Malmö (196).

But with those areas also the four most-populated places in Sweden, that only tells part of the story. A better picture of the brainiest parts of the country is provided when the number of Mensa members in proportion to the municipality’s population is examined.

While 0.11 percent of Stockholmers are Mensa members for example, that’s only enough to make it the Swedish municipality with the fifth highest proportion compared to its total population. Using the same criteria, university town Lund in southern Sweden comes out on top, with 0.16 percent of its population Mensa members.

The place with the second-largest proportion of members to population is Solna (0.15 percent) followed by Täby (0.13 percent). Both are in Stockholm County, but not part of the Stockholm municipality.

Swedish cities with the most Mensa members