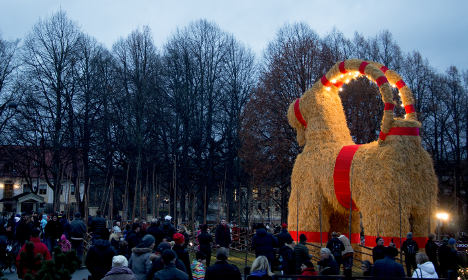 For 50 years, Gävle in central Sweden has hosted a giant straw goat as part of its Christmas celebrations, but the habit of random arsonists burning it down is becoming just as well known as the goat itself. It has been attacked and destroyed a total of 34 times to date.

Last year it survived past Christmas day, but only just. The man on trial today is accused of being responsible for setting the last goat ablaze on December 27th, 2015, after a guard spotted him running from the scene while it was in flames.

Arrested immediately after the goat burned down, he had a singed face, smelled of gasoline, and was holding a lighter in his hand. Newspapers and a balaclava were also found in his pockets.

The man, who is accused of gross infliction of damage, initially denied he was responsible for the fire but later admitted during questioning that he had committed the offence. He was drunk at the time, and has recognized in retrospect that it was an extremely bad idea, local newspaper gd.se reports.

Gävle municipality now wants him to pay 100,000 kronor ($10,989) for the destroyed goat. More money is being spent on the creature this year than ever before, with the local council allocating an extra 850,000 kronor ($98,908) to the Christmas staple on the year of its 50th anniversary, bringing the town’s total Christmas celebration budget up to 2.3 million kronor ($253,260).

Part of the money will be spent on employing extra guards to try and keep the goat in tact for as long as possible this Christmas. History suggests it will be a tough ask.