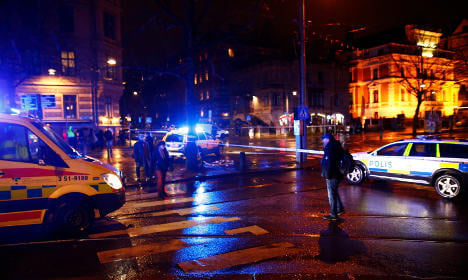 Police at the scene in central Gothenburg on Sunday. Photo: Thomas Johansson/TT

Police and emergency services were called out to a shooting and a car fire on the central Vasagatan street at around 6.30pm on Sunday.

A man was injured in the shooting, but made his way to hospital before the ambulance arrived.

According to the hospital the victim, who is in his twenties, was not believed to be seriously injured. Police said early on Monday morning that he would be questioned “as soon as his medical state allows”.

Three people were questioned on Sunday, but police said they were not under suspicion.

Police dismissed early reports that the car started burning after an explosion.

“Somebody started a fire, but there was no bomb or anything like that,” spokesperson Hans Lippens told the TT news agency.

A small section of Vasagatan remained cordoned off on Monday morning as forensic teams continued their investigation. Police said more witnesses were to be questioned.