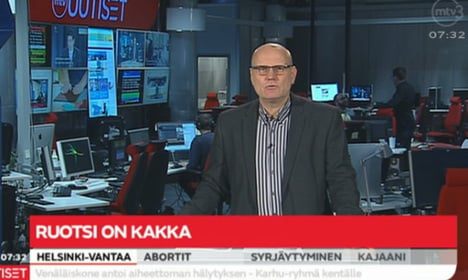 Anchor Jouni Sipilä was unaware of the message on screen. Photo: Screengrab

MTV3 – a Finnish TV station not related to the American network of a similar name – had a routine start to its 7.30am news show, as anchor Jouni Sipilä opened with a report about Donald Trump’s plans to pull out of the Trans-Pacific Partnership. But things quickly went downhill from there.

As Sipilä moved on to the recent earthquake in Japan, the phrase “Ruotsi on kakka” appeared in large text on the main onscreen caption. For the non-Finnish speakers out there, that means “Sweden is crap”.

The anchor only realized what had happened when he came off the air.

“I heard about it after my 7.30am news when the director told me. What a shocking moment! The news at eight was quite difficult to do,” Sipilä told The Local.

The text was only briefly on the screen, but it was long enough for eagle-eyed viewers to notice and start posting about it on social media.

“sweden is poop” -one of the leading news broadcasts in finland, 2k16

So how exactly did the unfortunate message get there? A ghost in the machine, it seems.

“A member of our morning team was testing our text editor system and just wrote something. The person took the text away after testing but somehow it stayed in the system,” Sipilä explained.

“We couldn’t see the text. The director took it away when she saw it on the live transmission after 1-2 seconds.”

Sipilä was keen to stress that he doesn’t really think Sweden is crap, and in fact, is actually part Swedish.

“I had some comments from my Swedish friends and colleagues, they took it with humour. But I have to admit, yesterday was a bit hard day for me because I am a great friend of Sweden,” he noted.

“I’m even a loyal rooter for Swedish sports teams (when they’re not playing against Finland), and I think Swedish society is the best in the world. My roots are in Sweden, one of my forefathers came from Umeå, so the stupid text didn’t represent my opinion at all.”

The Finn can rest assured in the knowledge that Sweden isn’t immune to a gaff or two of its own.

Like last year for example, when a Swedish women’s football team social media campaign inadvertently went viral after quick-witted readers picked up on the double meaning of its English hashtag “#clapforsweden”.

Nor does it mind being made fun of by its Nordic neighbours, who frequently take to Twitter to do so.