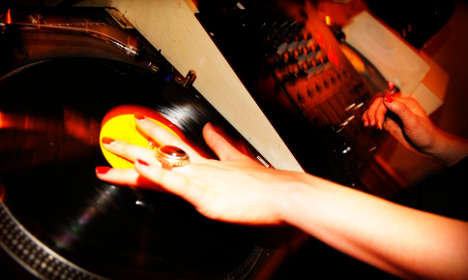 File photo of a DJ in a Swedish nightclub. Photo: Karin Malmhav/SvD/TT

But that's exactly what happened at a nightclub in the central Swedish town earlier this year.

One of the women was just leaving the toilets when she ran into a man waiting outside with his fly open, and proceeded to pee on her right leg, she told the police after reporting the incident.

He then urinated on the second woman, who described her dress and leg getting wet. When trying to escape, she slipped on the wet floor in her high heels, reported tabloid Aftonbladet on Thursday.

The third woman was also peed on, claiming her shorts, legs and shoes got soaked.

Afterwards, the women told officers that the man had been so drunk it was difficult to tell if he had actually intended to urinate on them.

“I don't want to believe something like that but have a hard time understanding how he managed to hit all three with his stream of urine,” Aftonbladet quoted one of them as telling the police.

The man, 42, was neither able to deny nor confess to the charges, because he had only vague memories of the night. In interrogations he said that it was one of the worst drunken experiences of his life, that his bladder was “close to exploding”, and that all he remembered was that he next woke up in a drunk cell.

Värmland District Court found during a hearing last week that the proscecutor had not been able to prove that the man had meant to pee on the women, and therefore threw out an intentional abuse charge.