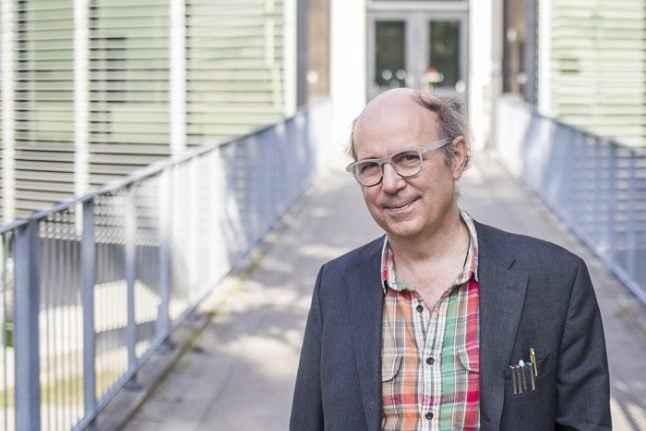 Sure, Stockholm is in full festive swing with charming Christmas markets dotting the city, and the sweet aroma of saffron buns and glögg lingering in the icy Nordic air.

And the buoyant mood sweeping over the Swedish capital has blanketed Stockholm University – but that’s not the only reason for all the excitement.

In addition to the thrill of holiday magic and the expected arrival of Jultomten, this is also the Nobel Week when the Nobel Laureates visit Stockholm to receive the Nobel Prize and to attend the Nobel Banquet in Stockholm’s magnificent City Hall. And Stockholm University is also excited to welcome Frank Wilczek, Nobel Laureate in Physics 2004, as a professor this year. Stockholm University has appointed American scientist Frank Wilczek as a Professor at the Department of Physics and Nordita (The Nordic Institute for Theoretical Physics), thanks to a generous grant from the Swedish Research Council aimed at recruiting top international researchers.

So alongside his position as the Herman Feshbach Professor of Physics at the Massachusetts Institute of Technology (MIT), Frank Wilczek, the Nobel Laureate who grew up in a working-class family in Queens, New York, is set to spend a considerable amount of time in Stockholm over the next ten years.

“As well as an attractive place to live, it’s a vibrant scientific environment with the Nordita, the Oscar Klein Centre and a number of centres of really excellent activity,” he continues.

“And I think it’s growing, and it’s a great opportunity now to build new activities as well as participating in the ones that are already here.”

Considering Wilczek’s impressive academic background, it’s not hard to see why he won the Nobel Prize.

Wilczek excelled in school and won a scholarship to study at the University of Chicago, graduating with a Bachelor of Science in Mathematics in 1970. He continued to study a master’s degree in the same subject at Princeton University, before completing a PhD in Physics, also at Princeton, in 1974.

It was in 1973, however, that Wilczek (along with a young professor named David Gross) discovered asymptotic freedom. It has to do with quarks, energy, and dark matter – you can read all about it here.

The scientists’ ground-breaking article would earn Frank Wilczek and his colleagues a series of prestigious awards – not the least of which was the Nobel Prize in 2004.

“We got that [Nobel Prize] for discovering the basic equations of what’s called the strong force,” Frank explains.

“It’s the most powerful force in nature. Understanding it has had many, many ramifications throughout physics and cosmology.”

Wilczek’s love affair with Stockholm dates back to his first visit to the city during the Nobel Week of 2004 when he received his Nobel Prize. Nobel Week, he recalls, was “magical”.

“We got to spend a glorious week in Stockholm,” he explains.

“It was an experience that changed my life. Everything was grand, but the highlight was the trumpet fanfare after I received the medal from the King – then I trembled!”

Since then, Wilczek has made several visits to the Swedish capital – captivated by its academic environment, scientific activity and natural beauty. In 2008, Wilczek and his wife, Betsy Devine, spent a semester in Stockholm researching at the physics institute, Nordita.

They both fell in love with the city.

“The water, the size, the cosmopolitan feel, the safety, the long sightlines across Saltsjö Bay, and the great public spaces…I’ve never seen so many happy families in my life,” Wilczek says.

So when, in January 2015, the Swedish Research Council offered a grant that would enable Wilczek to join the Physics Department of Stockholm University, the couple jumped at the opportunity.

“Betsy and I have had wonderful experiences in Sweden, and so when the opportunity to spend more time here opened up, we were pre-disposed to consider it sympathetically. Now we are also finding that the possibilities for creative scientific and cultural work here are very attractive,” Wilczek says.

Although Wilczek’s favourite place in Stockholm is the Gröna Lund amusement park, it took more than a few roller coasters to entice the Nobel Laureate to Stockholm.

“The presence of a vital scientific community is inspiring. I look forward both to participating in and helping to organize international workshops and visitor programs,” he explains.

“The OKC [Oskar Klein Centre] and Nordita are recognised brands, and draw excellent scientists from around the world. So that’s a big head start.” And now, 12 years on from his first visit to Sweden, it’s Nobel Week again… and Frank Wilczek is here to experience it. This year, however, Wilczek is among the organisers of an international workshop on axions and dark matter, hosted by Stockholm University and Nordita, taking place December 5th – 9th.

And aside from official events, he will also take part in a panel discussion at the university on the physics of this year’s prize.

“I take the Nobel Prize seriously,” he adds. “It’s not only an opportunity, it’s also a responsibility.”

Frank Wilczek may not be getting a medal this time around, but he will be staying longer, calling Östermalm home, with a walking distance to work. He hopes to build on existing relationships and make new friends in Stockholm over the next few years – while of course continuing to learn and make new discoveries.

“My main plan is to continue to do creative scientific work, and significant public outreach. Besides bringing in workshops and visitors, I will give short lecture series on current topics in theoretical physics,” he says.

“I also hope to help attract new students, post-docs, and young faculty to Stockholm, building on its existing strengths.”

You could say that Frank first came to Stockholm thanks to one strong force – but he’s staying thanks to many, many more.