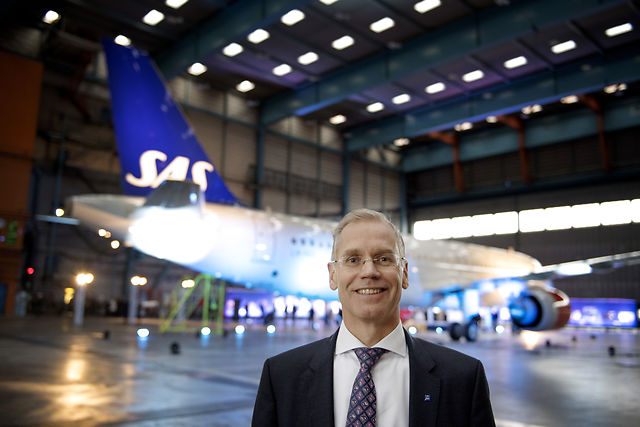 SAS CEO Rickard Gustafson revealed the plans in the company's year-end report. Photo: Jessica Gow/TT/Scanpix
“We have to create the preconditions to compete on equal terms with our competitors. Therefore, we are considering changing the focus for parts of our production by establishing airline operations based outside of Scandinavia,” the airline’s CEO, Rickard Gustafson, wrote in SAS’s year-end report.
SAS competitor Norwegian has established operations outside of Scandinavia via its Irish subsidiary Norwegian Air International, a move critics say was designed to circumvent strict labour laws in Norway and use crews from low-cost countries.
In a teleconference following the release of SAS’s year-end report, Gustafson stressed that the establishment of bases abroad would not necessarily mean the closure of its current bases in Scandinavia.
“We will still fly from Scandinavia. We need to do that in order to offer customers an effective flight plan,” he said, according to Danish news agency Ritzau. “But we need to look at whether we can turn some of our flights around.”
According to Ritzau, employer expenses in the Scandinavian countries produce an average hourly rate of €43, compared to the EU average of €25 per hour. SAS thus plans to determine if those potential savings could offset the costs of establishing new bases.
“We will use the first half of 2017 to make a plan for the future,” Gustafson said in the teleconference.
SAS said that its passenger numbers on long-haul routes increased by 25 percent in the fourth quarter of its 2015/16 fiscal year.
The airline announced in October that it was adding 15 new routes from Copenhagen, Stockholm and Oslo beginning in summer 2017.
SAS is 50 percent owned by the Danish, Norwegian and Swedish states. The airline celebrated 70 years in service in 2016.