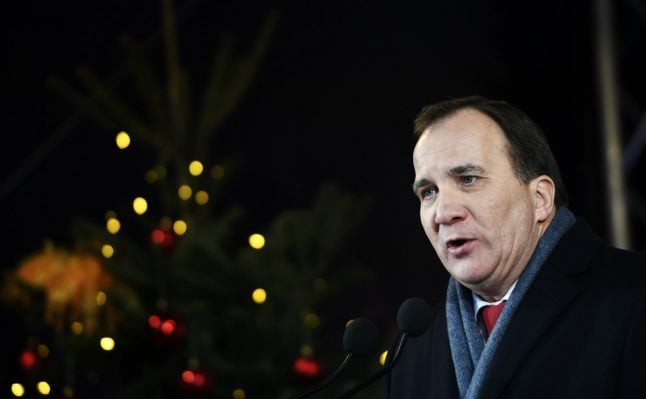 Photo: Pontus Lundahl/TT
“It is time to strengthen the unity of town and country, something that has been neglected for decades,” said Löfven during his Christmas speech at Stora torget (Main Square) in the town of Enköping.
Löfven talked about solidarity between town and country as a cornerstone of Swedish society, while also speaking of his concern at the decay of this sense of community from under the noses of politicians.
“I know that many people around the country are asking, 'what is the state?'”, said Löfven.
The PM will now give Ardalan Shekarabi, the minister for public administration, the task of ensuring that all citizens have access to basic public services, “regardless of where in the country they live.”
It could be argued that citizens have already paid taxes for this for many years.
“That is why we must ensure that things work. It is reasonable to ask that state services work all over the country, but we have been too focused on our own issues and not seen the country as a whole. Now we are going to grasp this problem,” Löfven said to TT after his speech.
In addition to guaranteeing a basic level of service for all citizens, the government also want to increase access to broadband Internet.
Over half a million more Swedes will have access to fast broadband within the next four years, according to the government, in a ramping up of Sweden's digital ambitions.
“We are establishing a roadmap for a fully connected Sweden,” said Löfven.
The PM also promised an improvement in the financial situation of the elderly – one of the most financially under-pressure groups in the country, according to TT.
The government plans to set up a commission to investigate whether the current pension and housing supplement is sufficient for those pensioners who are worst off.