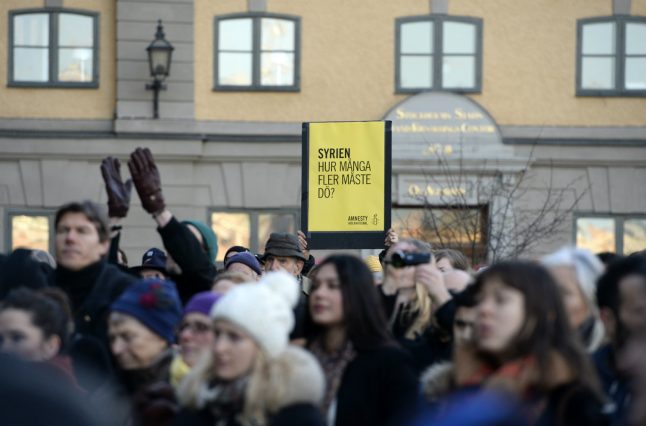 A number of big-name organisations attended the rally at Mynttorget. Photo: Pontus Lundahl/TT
An estimated 200 people took part in the peaceful demonstration at Mynttorget, where written banners and poster were largely absent.
On one piece of A4 paper a woman wrote the message “You are not forgotten”.
After speeches were held, the gathered protestors shouted “Stop the violence in Aleppo”.
“Our contacts inside Aleppo feel as though nobody understands what is going on and that no-one can see them,” Lena Ag, general secretary of Kvinna till Kvinna (Woman to Woman), the organisation that arranged the demonstration, told TT.
Today's demonstration at Mynttorget is a way of showing that this is not the case, Ag said.
“We see and we hear and we share their pain, despair and anger over what is happening,” said the charity director.
Organisations such as Amnesty International Sweden, Médecins Sans Frontières/Doctors without Borders and Save the Children can also be counted amongst those behind the demonstration.
Amnesty International's Ami Hedenborg told news agency TT that her organisation was in support of an intervention by the UN.
Although the demonstration is not political, Ag hopes that the message will lead to political action. Her organisation demands respect for humanitarian principles such as the protection of civilians and the forbidding of attacks on schools and hospitals. They also demand that those responsible for such attacks be tried for war crimes.
“We want to show our politicians that they have to act. We want the world's leaders to stop the violence,” said Ag, who said that similar demonstrations against the Aleppo violence were taking place all over the world.
“It is happening spontaneously in Sweden, in London, in Brazil. In Paris, the Eiffel Tower lights have been switched off in support of Aleppo, and in Amman people are going on to the streets to show their solidarity.”
Demonstrations also took place in Berlin on Saturday.
Ag hopes that the demonstration at Mynttorget will also help to counteract the feeling of helplessness. She is also convinced that the people of Syria will see the message being sent out.
“They will see pictures from all over the world. We hope that it will give them strength to see that the world cares and that they actually are not alone.”
Artists Moneybrother, Stefan Sundström and Sarah Riedel were all scheduled to appear at the event.