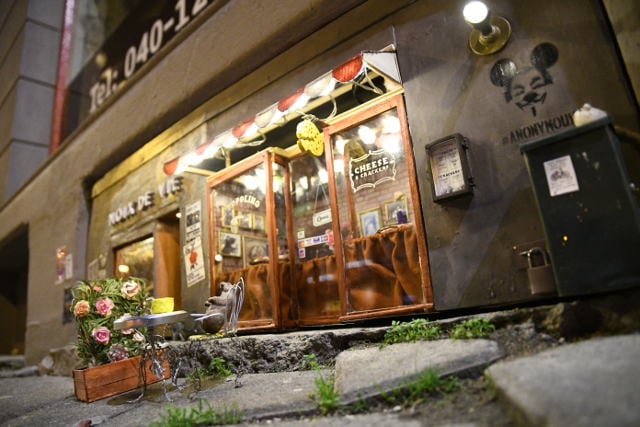 Earlier in December the anonymous artwork featuring a miniature, mouse-sized shop and restaurant appeared on a busy street in southern city Malmö, and it quickly gained international fame thanks to the hundreds of snaps uploaded to Instagram by locals revelling in the addition.

Created by artists known only as “Anonymouse”, the work soon took on a life of its own as Malmö residents started adding new details to it, including cheese, Christmas gifts, and even its own bus stop.

On Friday things moved to a whole new level however when Il Topolino and Noix de Vie received a mention in a segment on US talk show The Late Late Show, hosted by British actor and comedian James Corden, in which he argued that everyone should move to Sweden.

“If you want more evidence of how great Sweden is, artists over there are creating tiny stores that are just big enough for mice. It’s so adorable,” Corden said as images of the artwork appeared on screen.

“This is begging the question: Why the hell are we not living in Sweden? In New York City the rent on one of those places would be 4000 dollars a month,” he added.

That wasn’t the end of an action-packed weekend for Malmö’s most-popular eatery however. Late on Saturday night, it received perhaps the biggest vote of approval possible when its delicacies managed to attract one of the city’s resident mice.

The disappointed rodent was too late to get a table however, and after trying briefly to gain access to Il Topolino, scurried away into the distance. The surreal scene was all caught on video by Swede Samuel Lundberg.

“It didn’t manage (to get in) but seemed quite content anyway. People had left food out in front so it sat there and ate a bit of a cracker. It seemed to be out on the food hunt,” Lundberg told newspaper Sydsvenskan.

Asked if he knew why it was denied entry, the spectator played along, answering “Not really. It was really late so perhaps they’d simply closed the kitchen”.