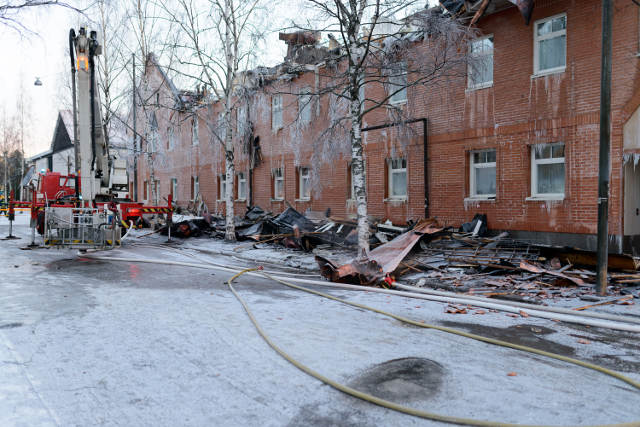 The remains of the building in Umeå. Photo: Samuel Pettersson/TT

The blaze started at around 6.30pm on Monday in a wooden building on the central Storgatan street.

Firefighters battled the flames overnight and well into the following day after they spread to a nearby building belonging to Swedish energy giant Vattenfall.

At 6am it had been prevented from spreading further, reported public broadcaster SVT, and an hour later it was under control. Emergency services said they did not think anything was still burning at around 5pm on Tuesday. The cause is still not known.

“The circumstances as to why the fire started are still unclear,” Karin Svedberg, who is leading the preliminary investigation for Umeå police, told news agency TT.

Police have started a forensic examination of the property and spoke to a number of witnesses over the course of Tuesday.

One of the gutted buildings. Photo: Samuel Pettersson/TT

An area around the buildings remains cordoned off due to the risk of collapse.

“It’s not that the whole building could collapse. But because it has burned a lot and the building is damaged, some sections could of course fall from the property,” police press officer Marie Andersson explained.

The fire and rescue services said they too will likely investigate the scene.

“It will be a case for the police,” Joakim Lavin of the fire and rescue services told SVT.

“But we're probably going to investigate it ourselves too. I have already had time to look at the construction of the building and the drawings and there are some gaps in the building where the fire started. It's a very complicated building,” he added.

Nobody was injured in the fire.