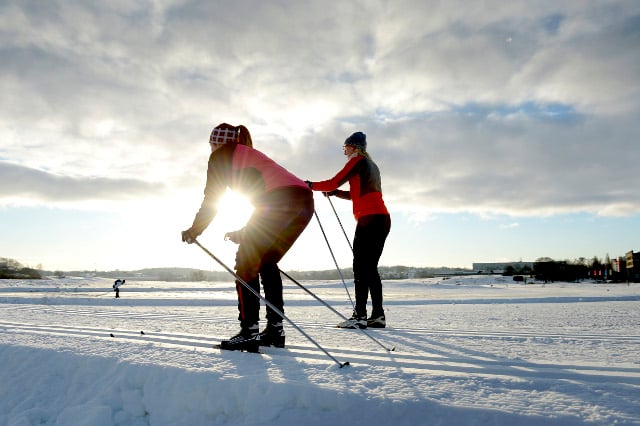 Believe it or not this is central Stockholm. Photo: Janerik Henriksson/TT

The festive season is over, and going back to work combined with agonizingly dark days means January can be a pretty rough time. Living in one of the darker parts of the world means Swedes have to work harder than most to survive the post Christmas period, so why not try some of these habits the winter experts have to get over the New Year blues?

When the initial novelty of winter frost wears off, the cold weather can become a real drag at the start of the year, but it’s possible to take a more positive approach. Why not try to make the snow an event to look forward to instead by doing what many Swedes do and taking advantage of it with some snow-based sports?

Downhill skiing and snowboarding are two obvious, adrenaline charged options, and even if there isn’t a great deal of snow on the ground, it’s worth checking online to see if a dry ski slope is within reasonable travelling distance. In the UK for example there are ample artificial slopes spread across the country.

If there is enough real snow on the ground, then cross-country skiing is also a great option, as all you need to participate is the equipment and some public land – no expensive pass required. It’s fun, addictive, and brilliant exercise, as the hordes of people doing it in central Stockholm this month shows.

2. Make escaping the cold good for your health

Doing outdoor sports probably won’t seem quite as appealing if there's a miserable storm outside as it would do in the fluffy snow, but instead of giving up, look to get your exercise kick in a warmer, more inviting environment instead.

It’s probably no coincidence that gyms in Sweden seem to be fuller than ever at this time of the year, as even many of the weather-hardy Swedes opt to keep fit indoors. ‘Join a gym’ may not seem like the most original advice in the world, but try and think about it this way: even if your enthusiasm wanes as the year progresses, the initial kick may just be enough to make the last couple of winter months more bearable. That’s worth its weight in gold.

3. Bake away your sorrow

OK, let’s get real: it’s cold, dark and wet, so discipline won’t always be at the top of the agenda at this time of the year, and opting to fill your face may be more enticing on occasion.

Don’t let them fool you: Swedes like winter comfort food as much as the next person (the sheer volume of buns and cakes in Swedish cafes proves it), but they’re also pretty good at actually making the stuff for themselves.

So instead of piling loads of supermarket-bought treats into your mouth, do as the Swedes do and bake them for yourself. It’ll taste better, it’ll distract you from the freezing cold outside for a while, and best of all, it’ll be far more satisfying when it comes warm and fresh from the oven.

4. But combine it with something healthier

The trick with winter food is balance, so along with the mouth-watering sugary stuff, home-baked or otherwise, it’s also important to get useful vitamins and minerals into your system through healthier meals at this stage of the year.

The raw food craze seems to be particularly big in Swedish cities at the moment, and with good reason: along with being packed full of exactly the sort of good stuff that your body needs during these dark days, it’s also tasty. Try a simple but delicious raw Swedish chocolate ball for proof. There's a raw version of just about every meal you can think of, so have a search and see if you can make your favourite dish healthier and better for the mind during this tricky dark period.

5. Read some books – real ones

In the age of Kindle, tablets and huge smartphones, it’s easy to think reading can be done on screens only, but traditional paper-based books are thankfully still a consistent presence in Swedish life, as exemplified by the shared bookshelves found in apartment blocks, offices and even ferries.

Right now is a particularly good time to go back to reading a real book for a number of reasons. For starters, it’s cost-effective – the ridiculous bargains on offer at charity shops are likely to be affordable for even the emptiest of post-Christmas wallets. Secondly, it keeps your eyes away from the impending end of the world as told by Twitter, and third, it can be combined with a trip to a cozy cafe. A good book is the perfect mental break from the tough slog of late winter. 6. Escape the office and get a glimpse of daylight

Stockholm never rarely feels busier than it does during lunch hour on weekdays. With daylight time more or less limited to office hours during the peak of winter, people here seem to have learned that it pays to get some sunlight into your system in the middle of the day while it’s possible.

It sounds ludicrously simple, but a 30 minute walk at lunch every day can make a world of difference in January and February. Along with the fresh air and rare dose of daylight, you may even forget you're still at work. At least temporarily.