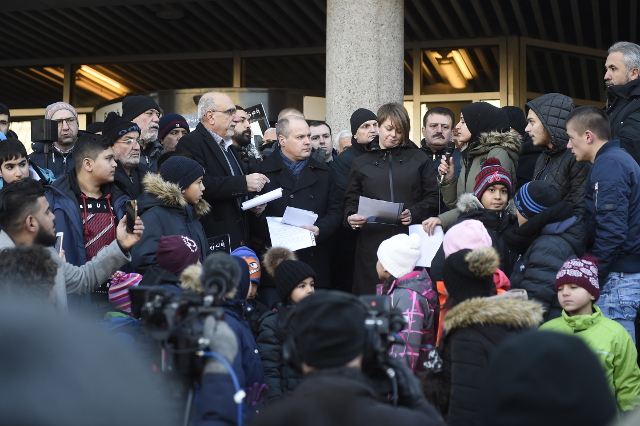 The murder of Ahmed Obaid, 16, who was shot dead by an as-yet unknown gunman on Thursday evening, sent shockwaves through the southern Swedish city. Unlike many previous incidents in Malmö, police do not believe his death is linked to gang violence, causing many to fear a rising tide of violence.

On Monday people gathered outside the city hall for a minute's silence in the teenager's memory.

“We won’t get Ahmed back, but I will be happy if this leads to the violence being stopped,” Obaid's father said.

“Our kids should sleep well, play at play parks, feel safe,” his cousin Housam Abbas insisted, adding that those who had been killed in violence in the city “won't come back, but we'll keep these people,” pointing to a group of children standing in front of him.

“What happened was devastating. It is a real shame that a 16-year-old should have to die like that. He had not lived his life yet,” high school student Rim Jabboul, 18, told the TT newswire.

“You have to look over your shoulder when you go out at night now. I don't let my little brother go out at night any more,” she said. “I hope that the politicians actually view this as a serious problem and start to solve this in Malmö.”

Justice and Migration Minister Morgan Johansson addressed the crowds on Monday. Before speaking, the organizers of the demonstration had handed him a list of measures to put an end to the violence.

“There's nothing on it I don't agree with. On the contrary. In my opinion there is no doubt what has to be done. We have to make sure that they can be prosecuted and that they can get long jail sentences,” he said.

“We have to get rid of the weapons, we need tighter punishment so that those who are held for serious gun crime can be arrested immediately and not just be released a few days later,” he added, saying that the government would propose such legislation to parliament.

“On a personal level it’s a tragedy, of course. Then, on a societal level it is completely unacceptable that we have this kind of environment where people take it upon themselves to murder,” Löfven told news agency TT.

Malmö pensioner Karin Rosén, another one of the people who joined the demonstration, said the protest was one of the measures needed to turn things around for the city.

“Innocent people are the ones affected, so I think it's really sad. But at the same time I see opportunities to do something about it. There are so many forces for good in Malmö,” she told the TT news agency. From The Local's archives: 'You get street smart when you live in Malmö'