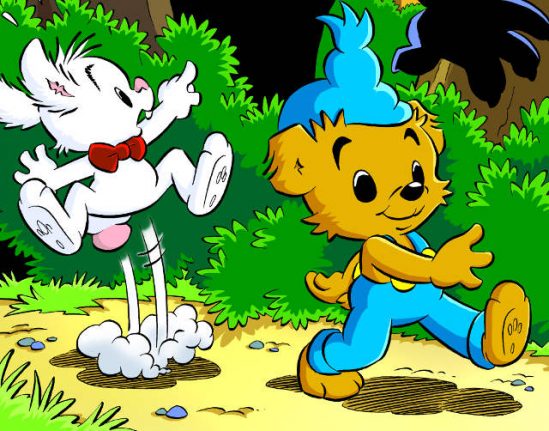 Bamse (right) is about to tackle one of today's biggest subjects. Photo: Bamse/Egmont

Bamse, a cartoon about a bear who becomes the strongest in the world by eating magic honey,  has captured the imaginations of Swedish kids for over 50 years since it was first published in 1966. Aiming to give children knowledge as well as entertainment, the comic has never shied away from big questions, and the next subject in its sights is fake news.

“The debate about the spread of fake news was ongoing when we came up with the idea for the theme. It’s a big and important question in society right now which we think a light needs to be shone on, even for kids,” Bamse’s editor in chief Charlotta Borelius told The Local.

The first comic strip on the theme, “Bamse and the dark forest” (Bamse och den mörka skogen) will be published in Bamse 2017 number two, which is due to be released in February.

And the comic’s editorial staff feels that addressing the topic of fake news is particularly important in an age of widespread social media use by children.

“Considering how social media consumption looks today, we at the Bamse editorial staff think the subject is extremely important. Information can come from so many different sources. Anyone can write whatever they want and release it to a huge audience,” Borelius noted. In this tile from the new comic, Bamse's friend Lille Skutt says the bear “doesn't get strong” by eating magic honey anymore, adding “I read it on the internet”. “Have you verified the source?” he is asked. Photo: Bamse/Egmont

“You have to be critical of sources, and you have to learn that at an early age. Through drawing attention to that subject we also hope that some parents will get involved and discuss it with their kids.”

The idea for the forthcoming comic’s subject matter came from the editorial staff’s participation at README in Malmö last year, a conference for schools, libraries and the literature world, which discussed facts, lies and conspiracy theories as one of its themes in 2016.

The Bamse editors were inspired to make a series about the theme, and enlisted the help of junior school and upper secondary school pupils in Malmö as well as internet and viral researchers for a workshop.

“The results exceeded expectations. Ideas for two new series were created at the conference,” Borelius revealed. The second comic on the subject will be released later in the year.

There has long been an educational side to the Bamse comics. One of the eponymous character’s children, Brumma, has been diagnosed with Asperger’s syndrome for example. Topics like racism, gender equality and addiction have also been addressed in the past.

“Bamse’s creator Rune Andréasson wanted to give kids both adventure and knowledge. The editorial staff of today has the goal of making a comic in Rune’s spirit,” the current editor in chief explained.

But engaging kids with a compelling story comes first and foremost, she added:

“The most important thing for us is that the stories are exciting, thought-provoking and entertaining. As a bonus they can also gladly contribute to good values and knowledge, as well as bring up various important questions in society – something which Bamse has been strongly associated with throughout all these years, and will continue to be.”